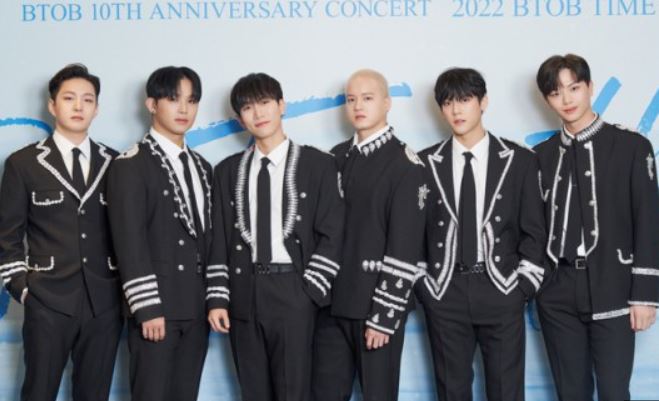 In “BTOGETHER,” a girl group cover stage, including solo songs by members, was also prepared. Seo Eun-kwang re-enacted the solo stage “The Man” on KBS2’s “Immortal Songs,” and Yook Sung-jae released his solo song “The Wind of the Day” for the first time. Peniel also raised his excitement with his solo song “FLY23.”

The highlight is the girl group medley of Seo Eunkwang, Lee Minhyuk, and Yook Sungjae. First, the members’ solo stage was held. Seo Eun-kwang prepared Ive’s “Love Dive,” and Lee Min-hyuk prepared Le Seraphim’s “Anti-Precyle.” Yook Sung-jae then took the stage and choreographed Newsz’s “Lower Boy.” The shouts of the audience reached their peak. The three members, who decorated the ending with laughter, said, “This is the hardest when we prepare for our concert. “You have to focus the most,” he said, shaking his body.”I took a short breathlessly.

The name of the project is ‘Nojin’s’. Lee Min-hyuk said, “I wore jeans today, but I couldn’t wear tight jeans because my thighs were too tight. So I explained, “Nojin’s’. Seo Eun-kwang then laughed, saying, “Isn’t it ‘no to get old?’ The youngest, Yook Sung-jae, pampered, “I’m in my 20s,” and said, “I was a ‘bite boy’ of Nojin’s.” I said I wouldn’t, but I don’t know why I put it in the Gugongtan. I’ll do it in five years.”

He continued to comment on his solo performance. Seo Eun-kwang, who prepared for “Love Dive,” said, “I was recently hooked on Gulish choreography while watching a dance competition program.” Seo Eun-kwang and Lee Min-hyuk said, “I was thinking about whether to do a live or not, but I thought it would be too dirty if our voices came out in our voices. That’s why I focused on performance,” he said, expressing the preparation process.

Lee Min-hyuk then said, “Isn’t Le Seraphim famous for ‘Geun Seraphim’? (Me too) It can’t be left out when it comes to ‘muscles’. It was “Anti Sugar” by Gonseraphim. These days, I only eat sugar-free Zero Sugar. He said, “I also eat zero sugar.”

Seo Eun-kwang sang “The Man” that he sang in “Immortal Songs.” I thought a lot about my solo performance, but I prepared it because I wanted to show my true self as a singer. “I will work harder and sing good songs for you in the future,” he said. Yook Sung-jae, who prepared his solo song “The Wind of the Day,” said, “I wanted to sing it with Melody. “It was so nice that everyone sang it together,” he said. “It’s my first live.” “Since it’s winter, I arranged it with ‘Winter Wind’.” Peniel said, “It was awkward because I couldn’t dance. “I forgot that it was an English lyrics, so I handed the microphone to the audience and turned it back,” he said, making them laugh.

BTOB, which debuted in 2012, broke the military flag in February and returned as a full group in four years. Since then, he has released his third full-length album “Be Together” and topped the domestic music charts with his title song “The Song.” The performance consists of BTOB’s 10th anniversary song and individual stages of the members.