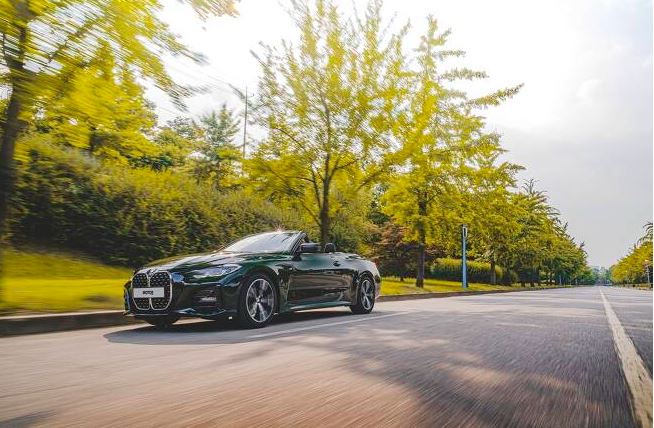 There is nothing stimulating. But it doesn’t bother me at all. I met a convertible that I can’t get tired of even riding for a long time.

There is an ideal convertible. It should be soft and comfortable. Unconditionally, I like sports cars that have strong suspension and agile handling, but the open top model is different. You should be as merciful as a sedan rather than as sensitive as a sports car because you should be able to afford to drive. I was very eager to ride the previous F body 4 series convertible. Rather, I wanted it more than the M4 convertible. The 430i convertible, which has a softer output than the M4 convertible, which has an obligation to use its strong power, is not burdensome and can enjoy open airing strongly. I’m riding the long-awaited 4 series convertible again. The face and the roof also changed from hard to soft.

I was surprised to be delivered the car. I can’t believe you’re so quiet. It is a four-cylinder gasoline engine, which is as quiet as a six-cylinder engine and has a smooth rotating texture. The soundproofing is also meticulous, making it quiet even though it is an open top. I feel like I’m riding a top-class car as I slide along at a low speed. Power is simple. It’s less than 200 horsepower, but it’s not lacking. You can easily overtake a general traffic flow. It runs well even at high speeds without getting tired easily. Suspension has no tension for BMW. But this setting is correct for convertibles. Thanks to you, I can’t hear any noise from the chassis. It’s a new car, so there’s no room for it.

To add to the story of suspension, it’s coordinated beautifully. An 18-inch tire with a thick sidewall, a damper stroke, is long and has a low spring rate. This ensures rideability by filtering out bumps and bumps. On the other hand, if you turn the steering wheel sharply or lift the car on the highway, the lower body does not collapse. As well as sports, the lower body is also important for cars. The upper body is peaceful only when there is strong support. That’s what this guy is like. It shows the real side of BMW as if when it was soft. This positive duality is shown when there is no active variable damper applied. I’m proud of you.

I rode it for about three days, but it has many advantages. I didn’t expect it. There is more space in the back seat than I thought. I picked up two burly friends for a while. One is 190 centimeters tall and has a similar physique to the Julien River. Pushing him into the second row, his 175cm friend sat in the passenger seat. Both of them secured satisfactory legroom as they adjusted the first row seats kindly by yielding to each other. Here, I opened a loop for a friend in the back who was bending his neck. Even if I couldn’t sit behind me while driving, three black men could enjoy the open air ring together. Four smaller women would be able to ride really comfortably. Second row space has become more useful than previous generations.

There was also a benefit when it moved to Softtop. First of all, the roof line has become more flexible as it takes care of its classic look. Usually, soft-top has a hard line due to the frame, but the 4 series convertible finished well. Also, if you touch the roof indoors, it is quite solid. This is because there are layers of insulation and canvas. When it rains, the romantic sound that can only be heard at an outdoor cafe whispers. Its weight is 40% lighter than its hard top, which also lowers its center of gravity. The front-to-back weight balance and low center of gravity are important for BMW’s move. The opening and closing operation time is 18 seconds, which is short and possible at 50 kilometers per hour.