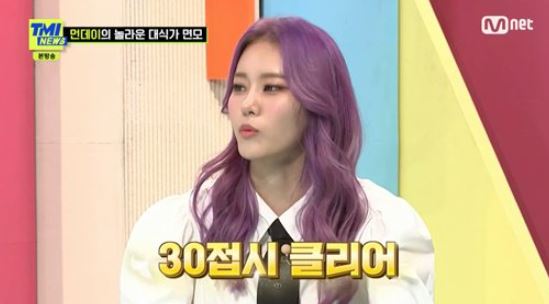 Monday, a member of the group Weekly, showed a big appetite.

On the cable channel Mnet’s “TMI NEWS,” which aired on the afternoon of the 8th, “Bewildered!” Various stories began under the theme of ‘Star WORST 14’ suffering from rumors.

On this day, Weekly said, “We were half joking and half serious at the beginning of our debut, so we called it Weekly because we have a big stomach.” In fact, my stomach has decreased since then, so I can’t eat that much,” he said.

Especially Monday, which was the biggest change. He surprised me by saying, “In the past, when I had a great appetite, I went to a sushi house with my family and recorded 64 dishes.”

Monday said, “It was about that much because five people ate it, and I ate more than 30 plates by myself. “I also ate five ramen noodles with rice in the soup,” he said. “In the past, I didn’t gain weight even if I ate like this, but I only eat one these days because I managed to eat,” he said.