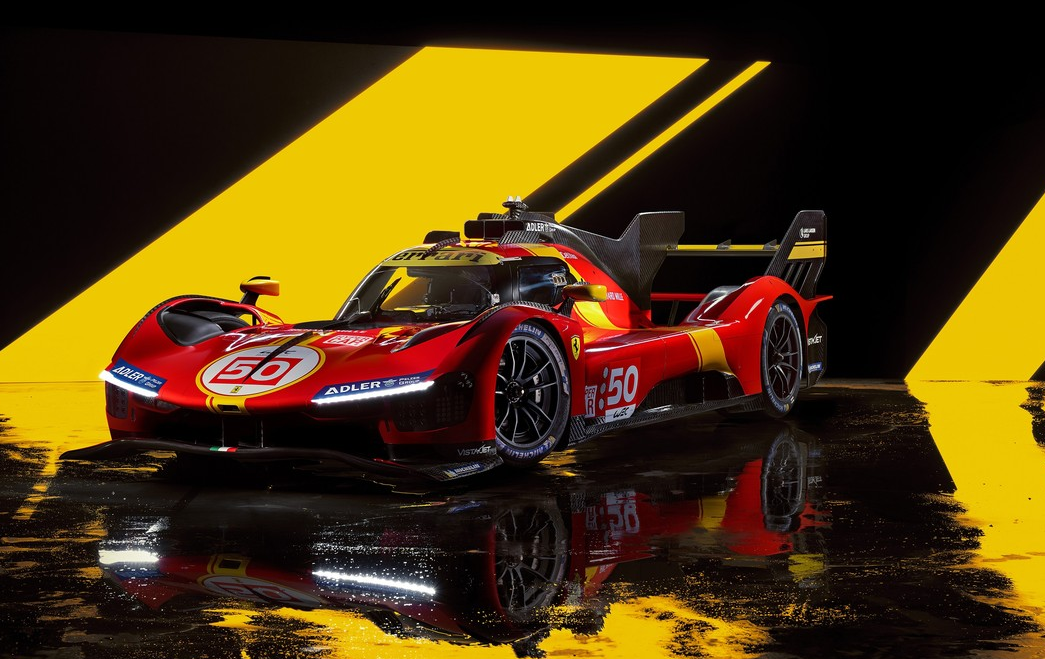 Ferrari unveiled a new Le Mans Hypercar, 499P, which will challenge the elite class of the FIA WEC World Endurance Championships from 2023. 499P is a name reminiscent of Ferrari’s history. In the past, Ferrari prototypes were named “P” and often appeared in front of a single engine displacement. The 499P is no exception. The vehicle is the result of Ferrari’s proud legacy of 22 world titles and nine overall wins at Le Mans 24 hours. On the other hand, since 499P is a prototype, it presents a future direction in both technical and design content. The 499P Rivery, which will debut in the upcoming ‘Sebring 1000 Mile’ race, reflects the color scheme of the famous 312P in the 1970s. This is to visually emphasize the historical connection with Ferrari’s last appearance model 50 years ago. For this reason, one of Ferrari’s durable racecars is likely to be numbered 50. On the other hand, the other will be decorated with the 51st, one of the most successful race numbers in Ferrari history. The official lineup of 499P drivers will be announced in the future.

In line with the new technical regulations for hypercar classes of the Fédération Internationale de l’Automobile (FIA) and the Automobile Club de l’Ouest (ACO), Ferrari began developing the Le Mans Hypercar (LMH) that was faithful to its tradition. Ferrari traditionally sees the ideal place for developing innovative technology solutions that can be applied to road cars as a ‘track’. The 499P can be said to be a declarative model that shows Ferrari’s willingness and effort to race durability. The 499P, a four-wheel drive prototype, complies with the technical regulations and requirements of the Le Mans Hypercar class equipped with a hybrid engine (maximum output of 500kw to the wheel and minimum weight of 1030kg or more). Ferrari’s own technology, expertise, and manpower were invested in developing the 499P. Atvit̀ Sportive GT, led by Antonello Coletta, is the head of the 499-P development project and is directed by Ferdinand Kannizo, head of engineering and development for sports cars and GT racing cars.

The 499P hybrid powertrain combines a mid-rear power unit with an electric motor that drives the front axle. The 499P internal combustion engine (ICE), derived from the twin turbo V6 family for public use, has a maximum regulatory output of 500 kW (680 horsepower (cv) for wheels and has the same structure as the engine fitted to the 296 GT3. The vehicle’s internal combustion engine was thoroughly inspected by Ferrari engineers to develop a temporary solution for the prototype and to lighten the overall weight. One of the biggest features of the 499P V6 engine is that it is a public engine. Therefore, compared to the engines of GT race vehicles fitted to the vehicle’s rear sub-chassis, the 499P engine can perform significant structural functions. The second feature of the hybrid powertrain is the ERS (Energy Recovery System), with a maximum output of 200 kW (272cv). The electric motor is equipped with a differential and is powered by a battery that is charged during deceleration and braking, so there is no need for a separate external power source. A battery pack with a nominal voltage (a voltage value representing a representative value when a given voltage is changed or there is a tolerance) was specially developed for the 499P based on an experience polished in Formula 1. The 499P has a maximum output of 500 kW (680 cv), and a seven-speed sequential transmission is connected to the powertrain.

be designed by the wind

The design of the new Ferrari 499P has become more sophisticated with the support of the Ferrari Styling Center, led by Flavio Manzoni. The technical and aerodynamic features of the vehicle were further enhanced by clearly representing the simple, smooth shape of the Ferrari’s DNA. The balance between these two elements, ‘fierce lines’ and ‘water-flowing surfaces’, expressed in futuristic, pure and symbolic languages, embodies a clear and essential architecture. The body of the prototype is carved from a flat surface to form a shape in which side pods and wheel arches are developed in harmony. The aerodynamic flow passes through the side pods over the recesses between the ridges surrounding the driver’s seat and cools the radiator hidden under the body. A feature of the wheel arch surface is a large louvres mounted to reduce the pressure inside the wheel housing, which, along with a headlight cluster, infuses a character into the 499P nose area. In addition, this nose part subtly uses styling that was first introduced in Ferrari Daytona SP3 as a reference. The rear of the vehicle ultimately expresses how it blends technology, aerodynamics and design. The carbon fiber epidermis, which is responsible for various functions, clearly reveals the wheels and suspension. The features of the tail are dual horizontal wings, with the main wing and upper flap carefully designed to ensure the required downforce and achieve maximum performance. The lower wing was also equipped with a “light bar” that enriched the rear design of the vehicle with a firm and minimal touch. Finally, the upper center of the vehicle is equipped with multiple air inlets that inhale air from the V6 engine and supply cooled air to the battery and transmission.

Built on a completely new carbon fiber monocoque chassis, the Ferrari 499P demonstrates state-of-the-art motorsport technology solutions. Double wishbone structure, push-rod-type suspension, ensures excellent damping rigidity and offers great advantages in maximum speed and cornering. Electronic systems have been developed through the experiences accumulated in GT racing and the innovations resulting from them. The highly sophisticated brake system interacts with the brake-by-wire system to recover kinetic energy by the electric front axle during braking. The system was developed to incorporate accuracy, response rate, reliability and durability, one of the key factors that will determine success in endurance races. The electric front axle uses the energy recovered from braking to store it in a high voltage battery, and when it reaches a certain speed, it transmits torque to the front wheel. This is expected to help improve track performance in the race to be held in 2023.

The Ferrari 499P will be operated on the track by Maranello engineers and engineers in collaboration with AF Corsé. Their winning streak began with the 2006 FIA GT Championship, which they competed as F430. They won the team, driver and constructor titles in their debut season in 2006. Most of Ferrari’s GT success in recent years, including the 2012 World Endurance Race Championships (WEC), has been the result of a partnership with AF Corsé. Ferrari Chairman John Elkan said, “The 499P is a vehicle that has returned to Ferrari’s perfect victory in the WEC series. The decision to commit to the 499P development project means that Ferrari has taken a step further on the road to innovation and development. This innovation and development is based on Ferrari’s tradition of considering the ideal place as a “track” in developing state-of-the-art technology solutions, and these solutions will be applied to Ferrari road cars over time. “Although Ferrari is taking on the challenge with humility, he also has a record of more than 20 world titles and nine overall wins at Le Mans 24.”