Tak Jae-hoon failed to win the grand prize at the Entertainment Awards, saying, “Money instead of the prize…”18 billion won in annual sales父All-in to Remicon Chairman”Dolsingpo Man” 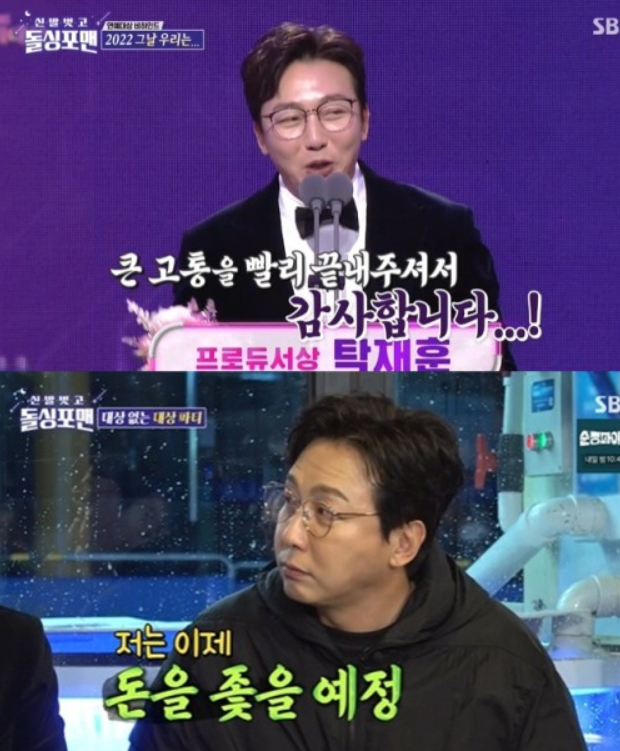 Broadcaster Tak Jae-hoon was nominated for the grand prize at SBS’s “Entertainment Awards,” but unfortunately, he sublimated the situation with laughter.

On this day, members of “Dolsing Four Men,” including Tak Jae-hoon, Lee Sang-min, Kim Joon-ho, and Im Won-hee, were nominated for “Entertainment Awards” as entertainers who shone throughout the year. Tak Jae-hoon and Lee Sang-min were selected as candidates for the grand prize, raising expectations early on, and Tak Jae-hoon even served as the MC of the “Entertainment Awards,” signaling an extraordinary performance. Before the awards ceremony, the two joked, “If it is a joint award for the grand prize, I will refuse the award.”

When the awards ceremony began in earnest, Tak Jae-hoon was especially nervous. In the end, among the members of “Dolsing Four Men,” Kim Joon-ho won the SBS Son Award and the Best Award, and Tak Jae-hoon won the Producer Award, which unfortunately failed to win the grand prize. Tak Jae-hoon also drew attention by expressing his feelings at the ceremony, saying, “Thank you for ending the great pain in Bali.”

At the “Dolsing Four Men” dinner after the awards ceremony, those who gathered again expressed regret over Tak Jae-hoon’s failure to win the grand prize. Tak Jae-hoon said, “I think our team has done a good job. But when I think about it, it was our own festival,” he said with a bitter heart. “My mom is not answering the phone. He doesn’t even answer the text. He said he would wait at home after cooking hot-pot rice, but he must be the only one who eats and sleeps,” he said tactfully, making everyone laugh.

In addition,  Jae-hoon said, “I’m not going to dwell on this award anymore. From now on, I will pursue money instead of a prize. “I’m going to pay all-in to my father,” he said. Earlier, Tak Jae-hoon’s father received a lot of attention on SBS entertainment show “My Little Old Boy.” Bae Jo-woong, the father of Tak Jae-hoon, is the head of a remicon company with annual sales of 18 billion won and serves as the general chairman of the National Remicon Company Association.

Tak Jae-hoon, who has a father who is the “King of Remicon,” became the “Con Spoon” through the broadcast, and Tak Jae-hoon’s father also said, “It’s a bit unfortunate because I didn’t succeed to the family business. My wish is for my son to come and take over the family business. But isn’t his professional job a celebrity? So when you’re in your field and settle down later, you’ll have your son’s share at that time,” he said, signaling a donation of property.