Start-ups and employment are all jammed…Job seeker. “Harsh Period” 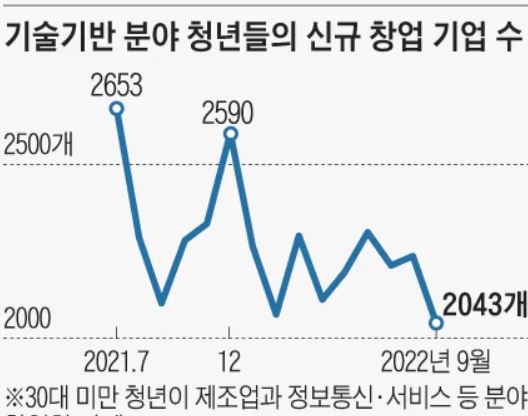 Starting a business under the age of 30, the lowest in two and a half years… Job openings in eight major industries, including IT, are also “quick.”

Park (24), a college student living in Seongnam-si, Gyeonggi-do, has quit his start-up activities in the second half of this year and is focusing only on preparing for employment at large companies. Originally, they prepared a startup that sells hanbok pajamas made in the traditional way, but now they decided to focus on having a stable main job. Park said, “It is difficult to raise funds for start-ups due to interest rate hikes this year,” adding, “I am anxious to do only what is exciting to achieve my dream.”

Young people in their 20s and 30s preparing to enter society in the midst of the recession are experiencing a triple whammy. As the economic downturn begins in earnest, a large number of people who have prepared to start a business as a criminal are turning to the job market. However, the employment gate is also showing signs of narrowing. There are many young people who are worried that they will endure a recession such as the cold season because it is too much to pay for their living due to soaring prices.

According to the Ministry of SMEs and Startups’ start-up trend on the 11th, the number of new start-ups in technology-based industries under the age of 30 in September was 2043, the lowest in two years and seven months since February 2020. The atmosphere of start-ups, which had heated up around universities, has cooled down. Kang (27), who had set up a clothing rental startup at a university in the Seoul metropolitan area until last year, is also preparing to close. It started its business with an investment of 300 million won in 2020, but investors said it was difficult to make additional investments since late last year.

At the job site, there are a series of responses that “corporate recruitment seems to be decreasing.” According to the career matching platform “Saminin,” the demand for jobs in eight of Korea’s 10 major industries, including construction, IT, and finance, decreased in the third quarter of this year from the previous quarter. An official from People said, “On average, announcements tend to increase compared to the previous quarter in the second and third quarters, but job openings are on the decline this year due to high internal and external uncertainties.” Kim (22), who is scheduled to graduate from a university in the Seoul metropolitan area, said, “Internship is a must to apply for a decent job, but the job market is so cramped that it requires another internship to become an intern.”

You have to hold out until you get a job you like, but as prices soared, the burden of living expenses increased. In particular, not only food costs but also various license test preparation costs are rising one after another. ” TOEIC speaking grades are essential these days, and even if you reduce your living expenses, it will cost you 84,000 won,” said Kim (25), a job seeker who has been working at a restaurant twice a week since April. “Even if you reduce your living expenses, you will have to spend 500,000 to 600,000 won every month.” Lee (25), a job seeker, said, “Even if you live at your home, you will spend 30,000 won if you eat two meals a day outside,” adding, “On days when you have an appointment to drink, you bring lunch boxes from home.”