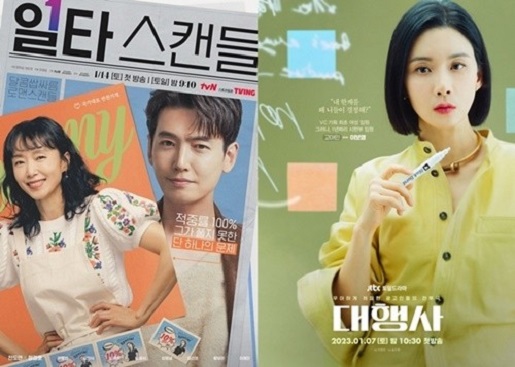 While “The Youngest Son of a Conglomerate House” was heating up at the end of 2022, anticipated works such as “One Hit Scandal” and “The Great Event” mark the beginning of 2023.

JTBC’s Friday-Saturday Sunday drama “The Youngest Son of a Conglomerate House” ended on the 25th. However, the final episode of “The Youngest Son of a Conglomerate House” drew disappointment with a very different ending from the original. Nevertheless, the viewer ratings recorded 26.9% nationwide, 30.1% in the Seoul metropolitan area, and 32.9% per minute. Target 2049 viewership also broke its own high at 11.9%, marking the end of the series as the No. 1 channel. (Based on paid households, Nielsen Korea).

“The Youngest Son of a Conglomerate House,” which was expected in 2022, attracted a lot of attention with its hot topic and ratings every time despite the unprecedented organization of Friday, Saturday, and Sunday. In addition, Lee Sung-min and Song Joong-ki’s performances also drew a lot of favorable reviews, heating up the end of 2022.

Following this baton, the new lineup in 2023 is also drawing attention. Representative works include KBS2’s “Brain Cooperation,” MBC’s “The Season of Puppy,” SBS’s “Betjon,” tvN’s “One Hit Scandal,” and JTBC’s “A Great Event.”

In particular, “One Hit Scandal” is Jeon Do-yeon’s return to Rocco, and “The Great Event” is Lee Bo-young’s return and “the sequel to the youngest son of a chaebol family.”

One-shot Scandal is a sweet and bitter romance between a passionate president of a national side dish store and a Korean math one-shot instructor in the battlefield of private education.

Jeon Do-yeon will be working on a romantic comedy 17 years after “Lovers in Prague” in 2005. He has shown unrivaled acting skills with genre films and deep melodrama. In this “one-shot scandal,” Jung Kyung-ho will meet to create synergy beyond imagination, as well as deep acting skills and unrivaled characters.

In addition, in “One Hit Scandal,” Jeon Do-yeon plays Nam Haeng-seon, a former handball player and currently runs a side dish store, and Jung Kyung-ho plays Choi Chi-yeol, the most popular star instructor with a top salary and popularity. While attracting interest from the unique character setting, it is raising expectations by predicting an unpredictable romantic comedy while smelling of people in the trailer.

On the other hand, “The Great Event” also points out women’s glass ceilings, raising expectations that Lee Bo-young’s cool cider-like performance will be able to be seen.

“Agency” is a battle drama of elegantly desperate advertisers depicting an orphan who became the first female executive of a VC group creating his career beyond the first and to the best position.

In the play, Lee Bo-young plays the role of an orphan who becomes the first female executive in a VC group. Go Ah-in is a “workaholic” who does not spend a single minute of his 24 hours in vain, and he is a character who struggles to create a career to the best position 강남매직미러

In this work, it is expected that you can feel catharsis with Lee Bo-young’s “fact violence” and cool cider remarks. In addition, as the women’s dance with Jeon Hye-jin and Son Na-eun is considered a viewing point, the synergy they will show is also intriguing