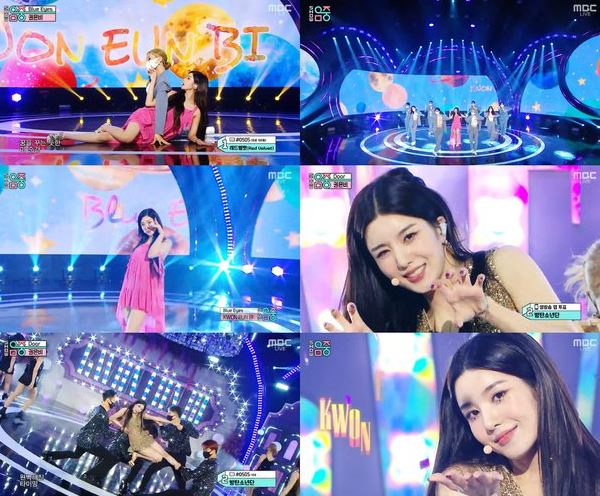 Kwon Eunbi is on MBC’s “Show” on the 28th. He appeared on “Show! Music Core” and presented the performance of “Blue Eyes” and the title song “Door” from his first mini album “OPEN.”

Kwon Eun-bi, who wore a pink dress on the stage of “Blue Eyes,” showed off her sparkling doll visuals. Kwon Eun-bi’s delicate dance moves and colorful facial expressions, which fit the mysterious atmosphere of “Blue Eyes,” made it impossible to take your eyes off her.

“Blue Eyes” is a song about a confident look at the shining light from the inside. Kwon Eun-bi even proved her more relaxed stage manners by conveying the message of a bright and hopeful song.

The “door” that followed was the standard of glamour. A magnificent stage set reminiscent of a Broadway musical caught the eye at once, drawing admiration.

Kwon Eun-bi wore a luxurious gold mini dress to complete a fascinating mood. In particular, he showed off his perfect chemistry with the dancers and showed unique performances, which once again shot at the hearts of global fans.

“Door” is an electro-swing genre song with funky yet jazz elements as the main instrument. Through the “Moon,” an object that allows us to meet a new space, it says, “We will show you who we have not been able to see in our own secret space.

Kwon Eun-bi, who won the title of “Complete Solo Artist” following “All-rounder,” the representative of the K-pop industry, will continue her active career with “Door.”