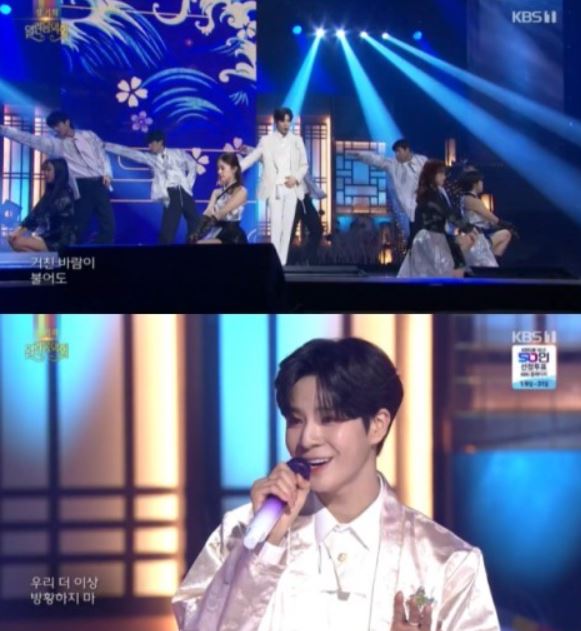 On this day’s broadcast, which was specially planned for the national holiday “New Year,” Jung Dong-won performed an exciting performance of the mini-album’s title song “Baenori” and sang “Hometown Station” and “Nest” with senior singer Jin-sung to heat up the atmosphere of the Lunar New Year holiday.

Singer Jung Dong-won appeared wearing an all-white neat suit and drew attention with his stylish visuals that stood out for maturity. As the first song, the title song “Bat Nori,” which features an exquisite combination of Korean traditional music, trot and dance songs, was presented with colorful dances and cool singing skills, coloring the audience with cheers.

Jung Dong-won, who introduced the song after finishing the “Baenori” stage, said, “The song I just played is “Baenori,” the title song of my album, and I would appreciate it if you love it a lot,” and predicted a collaboration stage with Jin-sung, a senior I respect.

Jung Dong-won, who then appeared wearing a hanbok jeogori with Jin Sung, raised the atmosphere of the Lunar New Year holiday to the fullest by singing “Hometown Station” with mournful emotions and savory tones. Subsequently, “Nest” was presented with perfect harmony with Jin Sung, and a special collaboration stage was enthusiastically received by viewers with bold stage manners and gestures that were not intimidated by the senior.