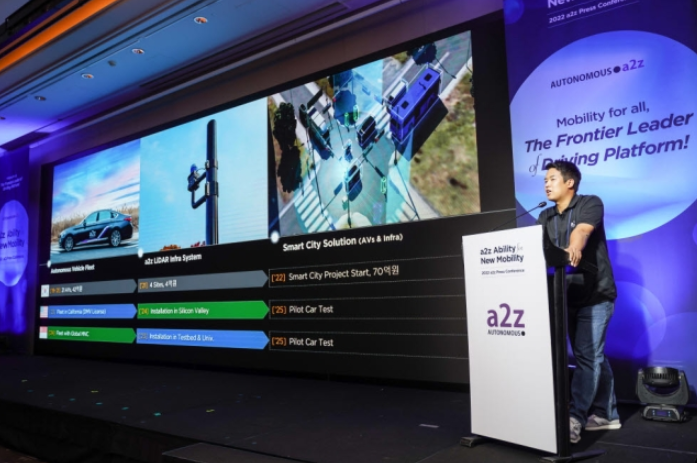 Starting with the demonstration of the modified self-driving car and LIDA self-driving infrastructure system, the company plans to sell smart city solutions including self-driving mobility developed by itself to countries around the world in the future.

A2z held a press conference at the Conrad Seoul Hotel in Yeouido, Seoul, on the 9th and announced plans to enter the U.S. and Singapore markets.

It will set up branches in the U.S. and Singapore next year and prepare all necessary matters for the business.

As it is a startup with limited manpower, it has increased efficiency by making the two countries’ business development schedules different.

The United States is a leading market for autonomous driving technology. It is easy to do business because there are no compulsory regulations and only guidelines at the federal government level exist.

In order to enter the U.S. market, a2z has completed the registration of the National Highway Traffic Safety Administration (NHTSA) ‘Voluntary Safety Self-Assessment (VSSA)’ in accordance with recent guidelines.

It is the 27th in the world and the first Korean company. In addition, remote autonomous driving technology, which is a necessary condition for demonstrating unmanned autonomous vehicles, has been internalized.

It is planning to obtain an autonomous driving license from the California State Transportation Authority (DMV) by the fourth quarter of this year. After establishing a U.S. branch in the second quarter of next year, it will start demonstrating in earnest.

The plan is to first apply the LIDAR autonomous driving infrastructure system to self-driving test bad including universities and expand it to public roads.

The system can monitor pedestrians and vehicles by LIDAR and transmit and receive data through V2X communication.

Self-driving cars can overcome sensor limitations with the help of infrastructure, which increases safety.

A2z plans to ultimately sell smart city solutions to countries around the world, including self-driving mobility and LIDA self-driving infrastructure systems, which will be mass-produced in 2027.

The self-driving mobility under development is ‘SD’, a small delivery platform with a 3m long length, and ‘MS’, a 5m medium-sized shuttle platform.

It will be produced through its own factory with an annual production capacity of 30,000 pyeong to be completed in 2026.

Test cars will be released in the first half of next year. Before mass production, a2z plans to start demonstrating public road driving in Korea, the United States, and Singapore from 2025.

It is planning to secure customers by developing it in sales activities based on technology.

The necessary manpower due to the expansion of the project will be recruited not only through external recruitment but also through self-discipline programs for master and doctorate students.

Han Ji-hyung, CEO of a2z, said, “The unmanned self-driving car market will still dominate the market in the early stages and widen the gap with large companies,” adding, “We plan to maximize profits by selling various solutions, including self-driving mobility and lidar infrastructure systems.” 토토사이트

Meanwhile, a2z will conduct Series B investment rounds from July 1 to early November.

Through this, it plans to raise more than 100 billion won and spend it on autonomous driving technology and mobility research and development (R&D), overseas market entry, and mergers and acquisitions.