Ryu Hyun-jin’s “one wing” has been deflected, a pretty serious problem. 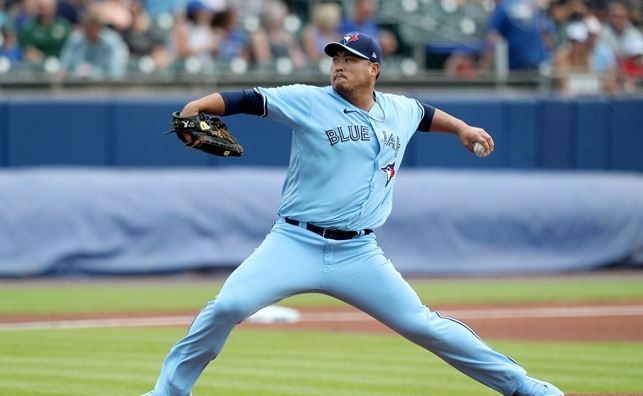 Ryu Hyun-jin (34), the Toronto Blue Jays’ Korean Monster, is surprisingly struggling in the 2021 season. He is still doing well, but his unique “stability” seems to have disappeared a little. The indicators have fallen. It hurts that one wing is bent. It’s a change-up.

Ryu Hyun-jin has 11 wins, 6 losses and an ERA of 3.72, playing 133 innings in 23 games this season. Most pitchers will definitely hear “good job,” but his head is slightly tilted because he is Ryu Hyun-jin.

First of all, his ERA is in the range of three points. It is also in the late three-point range. Ryu Hyun-jin was the last season to have an ERA in the three-point range in 2017. It was a season when he returned from injuries such as shoulders and elbows, and failed to play the full season normally.

Change-up is the main reason. Although Ryu Hyun-jin is a representative Koo Jong, he is not listening this season. Ryu Hyun-jin is not a fastball pitcher. He overpowered his opponent through cutter-change-up “both wings.” One side is bent. This is why it is not easy.

Considering that Cutter is maintaining 4.1 this year, following 4.9 in 2020, it is possible to solve that the changeup’s decline in pitch is leading to Ryu Hyun-jin’s decline in performance.

Ryu Hyun-jin’s changeup was -24 in 2019 when he saw pitchers with more than 50 at-bats. This means that he gave 24 less points due to changeups. He was second in the Major League. It dropped to -7 in 2020. Still, he was seventh overall in the big league and still had power.

So far this year is one. It does not mean blocking, but rather giving more points. 72nd overall in Major League Baseball. One of the two powerful weapons is blocked.

As the change-up didn’t work properly, strikeouts also decreased. Ryu’s walk per nine innings decreased from 2.28 last year to 1.89 this year. This side is positive. However, the number of strikeouts per nine innings fell from 9.67 to 7.17 or more. In the case of changeups, 22 strikeouts were made by throwing 315 last year. There are 20 strikeouts this year, but he threw 535 strikeouts.

Overall, he struck out 106 strikeouts and 28 walks, with a ratio of 3.79. It’s still good. There is no harm in having fewer walks and many strikeouts. However, the figure fell below 4.24 last year. It is even more disappointing compared to 6.79 in 2019.

Even in this situation, it is surprising that he has 11 wins and an ERA of 3.72. This means that either side is not a pitcher who collapses because of bad things. However, in the long run, the task of recovering the change-up ball is to be held. It is essential for the role of Ace.