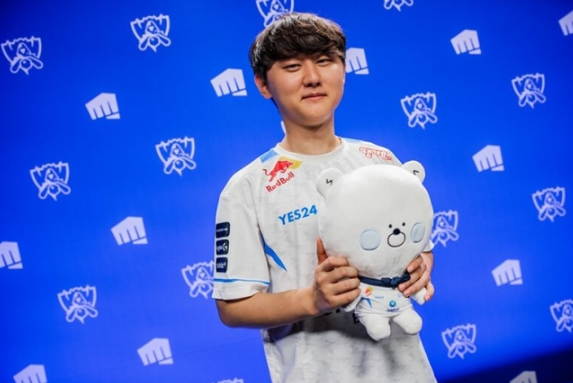 Pyo Sik Hong Chang-hyun expressed his determination to play in the quarterfinals against EDG.

DRX will play four games in the quarterfinals of the 2022 LoL World Championship (hereinafter referred to as the LOL World Cup) at the Hulu Theater in Madison Square Garden, New York, on the 24th Korean time. DRX, who joined the group stage as the No. 1 player in the group after beating RNG, which was considered a strong player from the play-in stage, also beat Rogue and TES in the group stage.

“I was confident because my team’s performance improved a lot, and I was able to advance to the quarterfinals because it worked well,” said Hong Chang-hyun, who responded to an interview with Inventory after the group stage. “Personally, I feel that I have improved a lot in the big framework and design in the in-game than LCK.” “I will continue to do well thanks to the interest and support of my fans,” Pyo Sik said.

The following is the full text of the interview with Mark.

Q. We advanced to the quarterfinals as the first place in the group. Did you expect that?

Rather than predicting the first place in the group, our performance improved a lot, so we played with confidence, which worked well and we were able to advance to the quarterfinals.

Q. What was the most memorable group stage match?

I think the game that won against TES in the first round is the most memorable. For me, it was my first appearance in the group stage, and the situation was not good because I lost one game, but by winning the TES, I got the biggest return among the games I won the group stage.

Q. Many say that the ‘mark’ player has improved compared to LCK.

Q. What part did you feel lacking during the LCK, and how did you try to fill it up?

There was no shortage at all in skirmishes or hits at the beginning of the season, but the overall details of the game were lost. To compensate for this, I spent the season focusing on it and played games, so in the second half of the season, I felt that the game flow was rather okay, but I lacked a lot in combat. I think my performance was also fluctuating because of the difference in the parts that I lacked every moment.

There was something specialRather, I spent time thinking about what I lacked. While eating, I constantly thought about the team play and thought a lot about the role, and I tried to apply it to the play

Q. What do you think is the most advanced part of yourself?

I think it has developed a lot in the big framework and design of in-game. In the past, I was not good at these things, so I had a tendency to simply play like flowing water, but now I think I can understand the concept of the team and design accordingly better than before.

Q. Coach Mowgli is a former jungler, so how does it help to have a coach from the same line?

I met the Jungle coach for the first time this time, and in terms of feedback, I’m very helpful in terms of call and game flow, saying, “If I were you, I would call in this situation.”

Q. The quarterfinal opponent will face another LPL team, EDG. Was there anyone you wanted to meet before the match was decided?

I’ve met Rogue before, so I wanted to get back together, but I’m sad that I can’t meet him because we’re in the same group. Except for Log, everyone is a difficult opponent, so I was waiting for the draw with the mind that I had to overcome it no matter who I met.

Q. What do you think about the jungle competition between “GG”? 토토사이트

Rather than having a special idea in the jungle confrontation, I believe our liners do better, so I think I can win if I play well, such as calling the enemy jungle location

Q. Lastly, please say hello to the fans who are supporting DRX and Mark

I’m always thankful to the fans who cheer for me regardless of my grades. Thanks to your interest and support, I will do my best