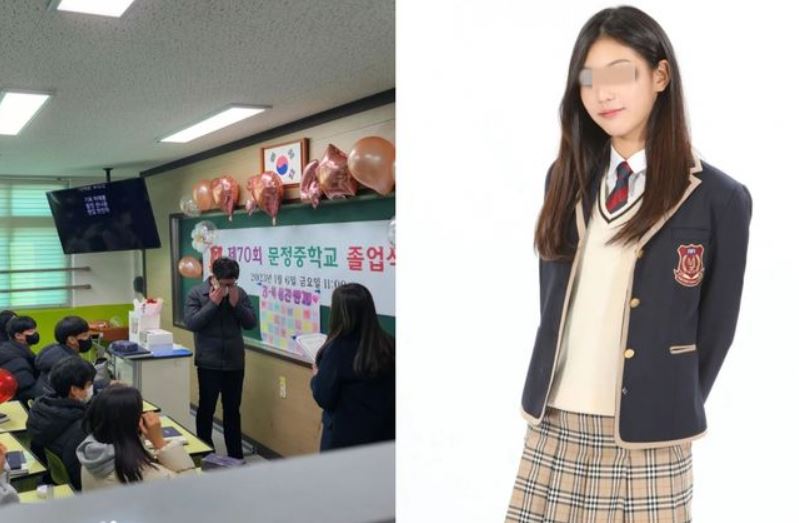 Recently, Park Yeon-soo said on his personal channel, “I wanted to give you a bouquet of flowers without Jia T.T congratulate you and go to a Chinese restaurant after the graduation ceremony.” It turned out that Song Ji-ah went on an off-season training.

Park Yeon-soo said, “I couldn’t go to the graduation ceremony due to COVID-19 and this time, Jia was not there and Jia was so upset, but I was so grateful that my homeroom teacher helped me graduate well.” He also certified that he attended a doze ceremony on behalf of his daughter.

Park Yeon-soo also expressed his gratitude, saying, “Thank you so much to my friends in class 4 of the third grade. Let’s all have fun and live a healthy life!!!!.” In response, fellow actor Park Eun-hye said, “I don’t think I just entered school, but I can’t believe I’m already graduating.” Congratulations. Netizens also said, “My mom suffered more.It’s not usually hard to make them exercise.”I want to pat you on the butt~ You did a great job~” He cheered and said, “Congratulations on Jia’s graduation!!”, “My mom is the wisest person. “It must have been hard to work out and study together, but you’re growing well like this, and I’m rooting for another start,” he said.

Park Yeon-soo married soccer player Song Jong-guk in 2006 and had a daughter, Jia, and a son, Ji-wook. However, the two divorced in 2015 and Park Yeon-soo has been raising their children since then. Among them, her daughter Song Ji-ah has been active as a junior golfer.

In response, Park Yeon-soo also said on his personal channel, “There is no such thing as everything. I didn’t achieve a perfect family, but I realized what I lacked and raised my children to do my best not to live repeated lives. “I sincerely support you so that your future can find true happiness from small things, not from material things,” he said.

I wonder if such a mother’s heart was conveyed. Song Ji-ah has recently become a promotional model for her middle school and is also on a roll as a junior golfer. In particular, Song Ji-ah’s outstanding beauty like a celebrity has become a hot topic every time. Recently, he caught the attention of netizens by revealing his neat uniform and posing naturally. Although Song Ji-ah is so busy that she cannot attend the graduation ceremony, she is expanding her capabilities and area. After that, his mother, Park Yeon-soo, was always supporting him as a confident single mother, making even the viewers feel touched.