Omega X who cried courageously, will it ring the alarm? 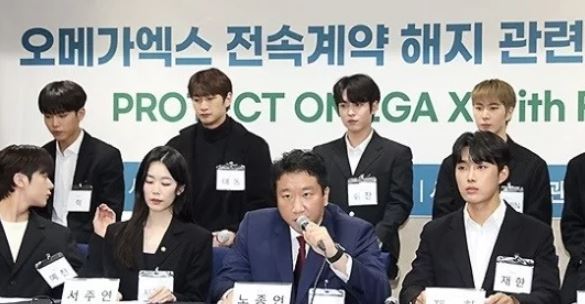 The group Omega X has exposed the abuse and power abuse of its agency, Spire Entertainment. Cheering and interest continue to those who have put all their dreams and courage, and attention is focused on what the future results will be.

Idol group Omega X (Jaehan, Hwichan, Sebin, Hankyeom, Tae-dong, XEN, Jae-hyun, KEVIN, Jung-hoon, Hyuk, and Ye-chan) held a press conference on the termination of the exclusive contract at the human rights room on the 5th floor of the Attorney’s Office in Seocho-gu, Seoul, at 2 p.m. on the 16th.

The controversy began when a fan’s camera caught Omega X being verbally abused and assaulted by the head of the agency. The agency was busy explaining, saying it was only a misunderstanding, but the repercussions continued as additional revelations emerged. Eventually, Omega X members admitted the damage and began legal action.

The damage that Omega X directly revealed at the press conference is serious. It was reported that there were threats from the CEO to make an extreme choice, sexual harassment, verbal abuse, and unfair treatment under the pretext of releasing the album, such as forcing drinking parties, sexual harassment and physical contact. In response, Omega X will notify its agency of the termination of the exclusive contract and take strong measures in the future, such as claiming alimony for damage and criminal charges.

Roh Jong-eon, a lawyer in charge of legal representation for Omega X, said, “All the members took great courage to come here. He said, “It’s not just our problem, but it’s all of our young members, and I took courage in the hope that we can change it,” adding, “In 2022, something unimaginable happened in Korea.”

The members are currently suffering from trauma, and some are also receiving psychiatric treatment. In addition, Taedong pointed out the backside of the colorful K-pop industry, suggesting that all of this was not just their job. He said, “Not all companies will do that, but I think many trainees and incumbent idol groups who dream of K-pop are also being treated unfairly.”

He, who used to work for 2Y Entertainment in the past, said, “Even the former agency received similar treatment,” adding, “The former agency made me do 15 to 17 hours of post-mortem without a day off, and there was unfair treatment of forcibly confiscating the cell phone.” There was also monitoring, such as checking the contact details of each member while asking for a password. “I lived a hard life day by day because there were frequent verbal abuse and assault,” he appealed.

In addition, a netizen who identified himself as Tae-dong’s older sister supported him after the press conference, saying that Tae-dong was unable to use his cell phone and was verbally abused and assaulted when he was at his former agency.

After Omega X’s revelation, Sukiyaki, in charge of Japanese management, has terminated his business contract with his agency, Spire Entertainment. The members said, “I’ve endured it to protect my dream, but I decided to be brave for my fans, family, and members.” Can those who have courage with tears raise alarms in the entertainment industry where unfair treatment is committed and lead to continuous change? Attention is being paid to the future legal consequences.