nreal Air, just watching the video is worth it 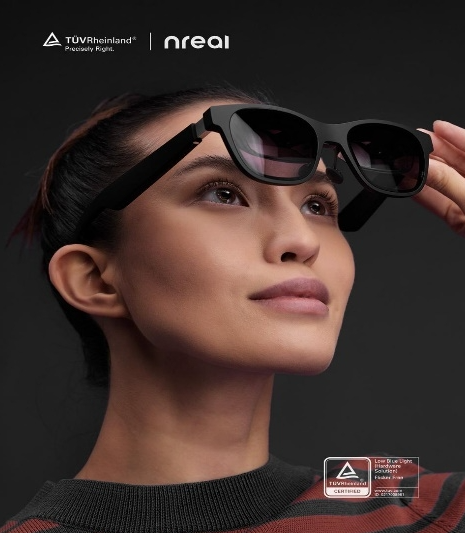 Under the banner of popularization of AR glass, AR glass global leader nreal Air has introduced a new product in the domestic market, which combines relatively low price, light weight, and simple design.

The rather thick-rimmed sunglasses-shaped nreal Air provides a super-large 3D screen of up to 201 inches, and even provides three-dimensional sound, drawing much attention as it can enjoy a variety of entertainment with simple cable connections with various mobile devices.

At first glance, nreal Air is designed more like sunglasses than IT devices, which can be misunderstood as regular sunglasses products. The frame of the glasses is somewhat thick, giving it a unique feeling that is different from ordinary sunglasses from the side, but the other parts of the nreal Air product look like ordinary horn-rimmed sunglasses. If you look at someone wearing nreal Air from the front, it is difficult to feel the peculiarity.

The nreal Air weighs 79g, and its fit is not much different from regular glasses. Three nose supports of different heights are provided to maintain the optimal fit according to the height of the user’s nose. It even provides a lens frame for an optical lens for a glasses user. It can be said that there is a good reason why nreal is confident that it is “at a level that can be used in everyday life.”

However, it is difficult to use it as a simple fashion accessory because the front lens and the tilted micro OLED display overlap with the double lens configuration. Because the front view is not completely secured, it can be dangerous to wear at all times like regular sunglasses when moving stairs or passing through an area with obstacles. However, it seems that it will not be too much to use AR glass by moving a short distance.

nreal Air can be used simply by connecting USB-C type cables with Samsung’s latest high-end Android smartphones, including the Galaxy S22 series. If you install a dedicated software nebula on Google Play, connect the nreal Air, and run the program, you can choose between “AR Space” and “Air Casting” functions.

“AR Space” has a 3D screen of more than 200 inches in front of the viewer, with a fixed location and a display that extends to a wider area than the user’s view. It feels like a super-large curved wide monitor is placed not far from the eyes, and the areas are divided, and each application is placed in an individual area. Basic apps such as YouTube and Internet driving are supported, and applications for fitness and digital pet raising apps are provided as basic.

The reporter, who was somewhat disappointed after looking around the “AR Space” function, could not help but be satisfied with the “air casting” function. “Air casting” is a function that shows the user’s mobile phone screen on nreal Air’s micro OLED display as it is, and the screen is fixed to the user’s front view. Even if you turn your head, the screen moves in that direction, so even if you change your posture while watching the video, you can continue to see it without having to turn your head.

Although it is regrettable that the size of ‘Air Casting’ is half as small as ‘AR Space’ based on horizontal length, it provides high-quality images with clear OLED displays. The “Air Casting” function also has the advantage of being able to use the existing mobile market app without additional development for nreal Air, and you can enjoy the latest videos such as Netflix, Disney Plus, and YouTube on a large screen only with nreal Air connection.

The reporter watched a variety of videos through nreal Air, including Disney Plus’s “Avengers” series and YouTube broadcasts of the latest movies “The Witch 2” and “League of Legends” e-sports games released on Wave. Compared to LCD TVs and monitors, the quality of nreal Air, which is equipped with full HD resolution micro OLED displays, was felt one step higher. The full HD resolution of nreal Air felt better than the 4K resolution of the LCD display.

The reporter is using LG Electronics’ 65-inch OLED TV, and nreal Air also showed a screen close to OLED TV. The screen size seems to be larger than 65 inches, and it is also full of vivid image quality in 720P images as well as full HD resolution (1080P). When targeting low-resolution content on large screen TVs, the dots often stand out so much that the immersion is reduced. Perhaps because the display of nreal Air is ultra-small, there was no special sense of difference in watching low-resolution content.

◆ Speaker with built-in stereoscopic sound is not bad either

nreal Air has a built-in speaker that supports stereoscopic sound on the rim that touches the ear. If you listen to it in a quiet place, you can enjoy the sound with a fairly large volume in three dimensions. However, it is difficult to say that the sound quality of the speaker itself is excellent, even if it is not to the extent that it cannot be heard. In addition, even if the speaker is used below the medium volume, it is difficult to use the speaker at all times because the sound is heard around it. 안전놀이터

Instead, it can be used by connecting wireless earphones, headphones, and speakers to a smartphone, so it is an advantage that it can reinforce the regret of the built-in speaker or use nreal Air without interference. The use of built-in speakers will not be bad for lying in bed and comfortably watching videos before sleeping alone in a room without a TV.

◆ It’s enough to watch videos…What needs to be improved?

nreal Air was officially released in Korea at a price of 400,000 won. If you are a user of premium Android smartphones released within the last two years, such as the Galaxy S22, it is considered worth purchasing if you purchase nreal Air right away and use it only for viewing OTT services such as Netflix. However, it is regrettable that it mainly supports high-end smartphones among Android smartphones. Although nreal Air came out as a low-end device, it does not support low-end smartphones, so it is necessary to purchase high-end phones such as Galaxy S, Z-flip, and Z-fold to use nreal Air, which requires overlapping investment.

The reporter is using the Galaxy A52S, and although it is a relatively high-spec device among low-end products, it was not on the list of support for nreal Air, so he had to rent a separate smartphone before conducting a review. Due to the nature of AR glass, support specifications may be high, but if low-end smartphones are not supported at all, the meaning of nreal Air’s relatively cheap pricing may fade.

It is also regrettable that it does not support Apple devices immediately. Apple users should wait for the official release of separate converters. The converter for Apple has a built-in auxiliary battery, but it weighs and is bulky compared to USB-C type cables, which has the disadvantage of being less portable, so it may be divided into likes and dislikes.

Another task given to nreal Air is that the “AR Space” app should be increased in more various ways. Although its existence value is sufficient just by watching the video, it will be able to gain more momentum in the distribution of devices if killer content using AR functions increases as it was originally released as AR glass. nreal intends to create an nreal Air ecosystem through collaboration with various domestic developers. We look forward to nreal Air, which will be reinforced with various idea-based AR apps with a clear video viewing function.