The track list of the debut album of the group 8TURN has been released.

The group Atton (Jae Yoon, Myung Ho, Minho, Yoon Sung, Haemin, Kyung Min, Yoon Kyu, and Seungheon) released the track list of their first mini-album “8TURNRISE” on their official SNS in the afternoon of the 24th. 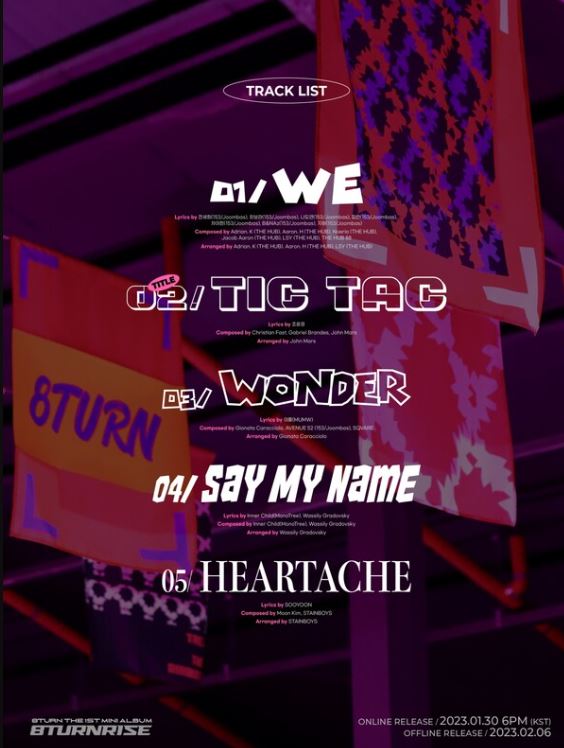 According to the track list, a total of five tracks, including the title track “Tiktaek,” “WE,” “Wonder,” “Say My Name” and “Hurt Ake,” will fill “8tonrise.”

The track list, where the flag bearing the team name “8TURN” reveals its strong presence, has the hot energy of “8TURN,” which stimulates curiosity about the entire album.

The group 8ton captured the first movement to wake up the world imbued with familiarity with five tracks in “8tonrise.” Eighton’s potential, which is recognized in the industry even before its official debut, is already fresh in combination with styling and unique trendyness that stand out for bold attempts, raising expectations.

The eight members with infinite possibilities are determined to faithfully portray the message, “The value that represents me is myself,” with high-quality music and differentiated performances. Expectations are high for the first album of Eighton, which will be filled with confident and energetic music, not obvious and boring stories.

Eighton, which continues to announce a strong move to change the game of the 4th generation idol group by continuing various promotions, will release its debut album “8tonize” at 6 p.m. on the 30th and appear on debut shows on Mnet and M2 YouTube channels at 8 p.m. on the same day. The physical album began pre-orders on the 17th and will be officially sold offline on February 6th.