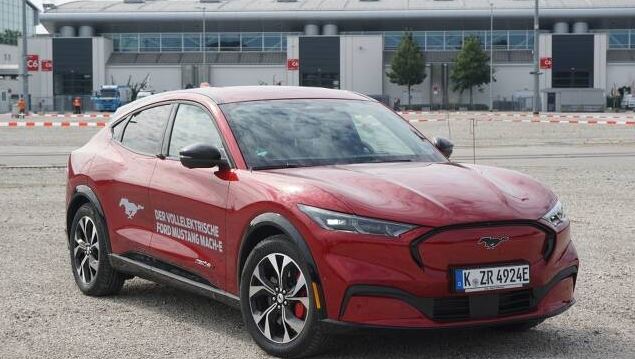 Over the past 55 years, many have been skeptical of the image quite different from Mustang’s identity, which represents American Muscle Car. In particular, many Mustang enthusiasts criticized Mustang’s sudden transformation into a crossover style, which was represented by a typical two-door coupe.

However, unlike many harsh criticisms, Mustang Mach E, which I actually met, is like a fusion dish that exquisitely mixes Mustang’s unique sensibility and electric car characteristics. I briefly rode Mustang Mach E in Munich, Germany, where IAA Mobility 2021 was held.

The test drive is a Mach E4X model with a four-wheel drive system as well as an 88kWh battery expansion option. Muscle cars’ unique slim waist and straight-out roof lines are no longer available, but the fierce impression of intense colors, sleek headlamps, and running logos is no different from before.

As you step back, Mustang’s unique three-line tail lamps and protruding trunk doors catch the eye. The three-line tail lamps connected to the long horizontal line blend with the color of the red body, making it feel as if you are looking at Iron Man’s face. The direction indicator lights are lit sequentially one line at a time like a mustang.

The 19-inch wheel halves the dynamic feeling. Of course, it is a choice for efficiency, but what would it have been like if a tire with a low flat ratio or a wheel of 20 inches or more were mounted?

Pressing the round button on the A pillar opens the door. Above it, like any other Ford vehicle, a function to open the car door with a password was placed.

When you open the door, you realize that this car is an electric vehicle. In the center of the room, a huge vertical display such as Tesla Model S welcomes the driver. A volume adjustment dial is located in the center of the lower end of the display. The combination of digital and analog is fresh.

The center display may manipulate all functions of the vehicle, including a drive mode, an air conditioner, a steering wheel, and a seat heating wire.

Relatively, the driver’s digital cluster is cute. The horizontal length of the screen is similar to that of any other car, but it is only half the length. Nevertheless, the level of information delivered is by no means insufficient. It delivers all information from the remaining mileage to the remaining battery capacity, external temperature, whether to wear a seat belt, sensors around the vehicle, and speed in a clean graphic manner. As it is thin, it is convenient to grasp at a glance between steering wheels. The absence of HUD is not regrettable at all.

If you select a gear by dial and place your foot on the accelerator pedal, the car will move forward. There is no vibration or sound, so it is definitely not like the previous Mustang.

I entered the city with doubts. When I take my foot off the accelerator pedal, the regenerative braking is stronger than I thought, and the car stops quickly. Mustang Mach E supports one-pedal driving, so there is no need to brake in leisurely daily driving. If you feel a sense of heterogeneity in strong regenerative braking, you can also turn it off on the center display. When the original pedal mode is turned off, deceleration is performed smoothly like a normal internal combustion engine vehicle when the foot is removed from the accelerator pedal.

I went up to the autobahn with the feeling that I was bored more than I thought. Only then does a Ford official next to it open a drive mode selection window. Mustang Mach E supports three driving modes: Whisper, Engage, and Unbridled.

In Whisper mode, which corresponds to the echo mode, it proceeds quietly as if whispering as its name suggests. Even if the accelerator pedal is pressed deeply, it does not react quickly and moves to an appropriate level. The engagement mode is the same as the normal mode of a general vehicle.

As I was in the autobahn, I signed the Unbridled mode. Mach E transforms into a wild horse in Unbridled mode, which means “unsuppressed.” First of all, a “doongdoongdoong” sound similar to the sound of horseshoe or V8 engine began to be heard from behind the vehicle.

I’m excited even though I know it’s from the speaker. And I encountered an unlimited speed section of the Autoban.

He boldly stepped on the accelerator pedal to the end. The dung dung sound from behind begins to rise and speeds up. As the battery is laid on the floor, the vehicle is stable even over 180km/h without feeling staggered.

However, the acceleration force is regrettable compared to the rising sound. The Mustang Mach E four-wheel drive model had high performance of a maximum output of 346 horsepower, but the whole body did not bounce off strongly with the momentum of being buried in a seat as it did in the first test drive of other electric vehicles. In other words, strong sounds fill the disappointment.

The thirst for fast speed felt even greater because the test drive was so short. If you want a true muscle car feeling, the high-performance model Mustang Mach EGT is a must, not an option.토토추천

Ford Mustang Mach E is meaningful in that it boldly broke the prejudice of the American Muscle Car brand and chose electricity.

I would like to welcome the fact that Mustang has not gone extinct even though the era of electric vehicles has arrived. However, it is true that poor emotional satisfaction is regrettable compared to the name value of Mustang. Wouldn’t solving this problem be the homework that not only Mustang but also all sports car brands have?