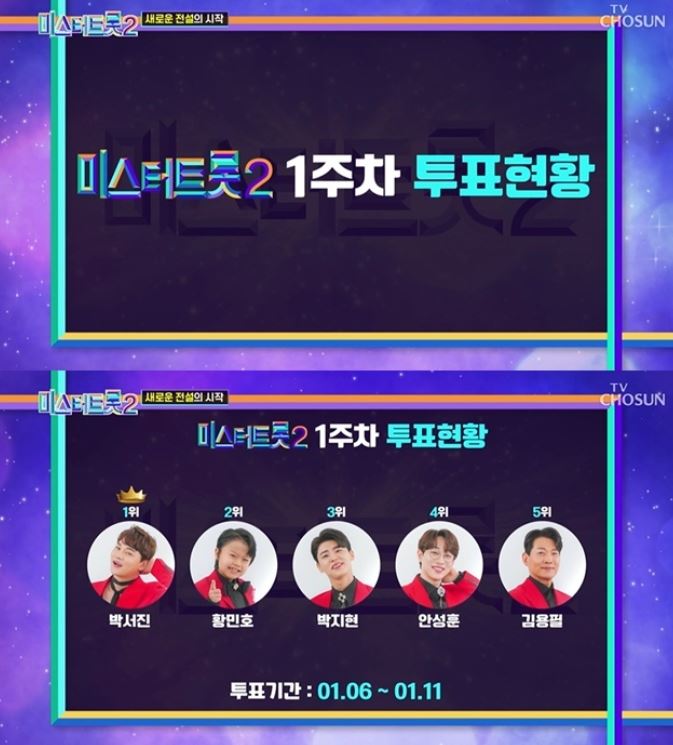 With the results of online voting in the first week of “Mr. Trot Season 2” released, attention is being paid to whether Season 2 will follow the true, good, and beautiful formulas of Season 1.

In the TV Chosun entertainment program “Mr. Trot Season 2 – The Beginning of a New Legend” (hereinafter referred to as Mr. Trot 2), which aired on January 12, the status of online voting in the first week was revealed. The vote was held from the 6th to the 11th, with a total of 1,716,057 people participating.

In particular, the results of online voting during “Mr. Trot Season 1” are drawing attention as they show the final results, the line, and the U.S. Lim Young-woong ranked first in online voting all the time except for the fifth week when Lee Chan-won topped the list, while Young-tak and Lee Chan-won alternately took second and third place every week. The three consistently ranked among the top three in each online poll.

As a result of the competition, Lim Young-woong, Jin, Young-tak, Sun, and Lee Chan-won won the beauty. Fourth-ranked Kim Ho-joong, fifth-ranked Jung Dong-won and sixth-ranked Jang Min-ho were also consistently listed in the top five online voting. This is the result of showing that the thoughts of the masters in charge of the screening and the viewers were exactly the same.

However, in “Miss Trot Season 2,” the online voting formula was broken. Jeon Yoo-jin was eliminated from the team mission in the third round of the finals even though she consistently topped the list from the first week to the fifth week. Yang Ji-eun, who won the final round of “Miss Trot Season 2,” ranked third for the first time in Week 5, ranked second in Week 6, and rose to No. 1 in Week 7.

Unlike last season, when unrivaled talents stood out, “Mr. Trot Season 2” shows that most of the participants have been upgraded. As a result, the result of the vote can also be overturned at any time. Attention is focusing on who will be the winner of “Mr. Trot 2” to succeed Lim Young-woong.

The production team said, “A new trot star will be born through a program called ‘Mr. Trot Season 2’, but the important thing in the end is that we have to move the hearts of viewers,” adding, “The participants who won a lot of votes in the cheering vote will be able to take a step closer to the final TOP 7.”