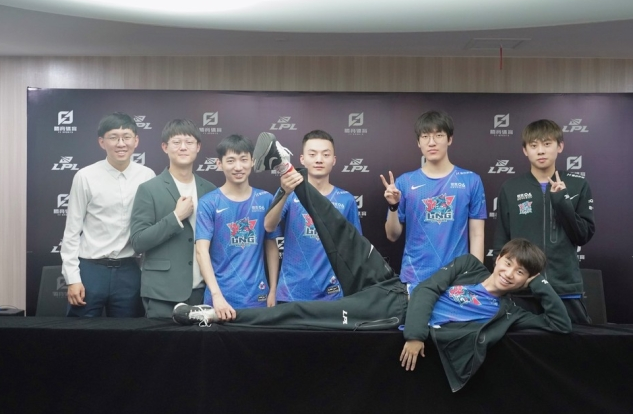 TT’s mid-liner, Yukal’s first win of the season, was blocked by “Dream,” ending in a dream.

In the first game against Anyonce Legend (AL) by Leaning Gaming (LNG), two Korean duo and Doinby-Tazan won the MVP in the 1-2 set.

In the first set, in the 35th minute of the game, Doinby (Clade), who was assisted by Wright (Apelios), continued to finish his low-strength enemies, winning a great victory in the midline 5-5 hit, and LNG won the victory.

In the second set that followed, Wright (Izreal) actually led the game with Nodes, but Tarzan also eliminated all objects except the second messenger and won with an easy performance, giving the team the “soul of the sea” (4 water).

In the two games, which drew the attention of many domestic fans, Victory 5 (V5) “Rookie Team Without Rookie” broke ThunderTalk Gaming’s dream of “first win.”

In the first set, Richie (Gwen), who didn’t miss a single gap, decided the victory.

In the 26th minute of the game, Richie took out a gold card in the middle line confrontation and focused his fire on Yukal, who was trying to target Potik (Cogmo), consuming his flickering and superwatch.

When TT, who was trying to help him, collapsed for a moment, Casa-Fortic killed TT’s core, Puff (Russian), and tilted the game. In this scene, the V5 who won the Baron-Dodge’s Soul (four Dae-yong) won the 29-minute match.

In the second set, Yukal (LeBlanc) was very active throughout the game, but the flow was reversed by a single mistake and gave up the game after a disappointment.

TT’s Yukal, who earned a kill score of 10-5 and 3 (in order of flame-sea-to-ground) in the 21st minute of the game, ambushed his opponent who had no vision near Baron.

Coincidentally, however, Richie’s right blocked him, and Yukal, who tried to overpower Richie, was trapped in the frosty feet (W)-ice tomb (R) of Dream (Lisandra) at a time when he was leaning forward.

Yukal, who had a sweet dream of “winning the first set” by overpowering Richie and acquiring Baron-Earth’s soul one after another, finally fell asleep in the ice provided by “Dreammaker.” On the contrary, TT collapsed in an instant when the mid-bottom duo gave Baron to the fighter and the opponent.

TT fought desperately for the next 13 minutes, but failed to defend the Nexus and recorded a disappointing defeat.

V5, who came from behind to win two games with “Dream” Lissandra, won the first game of the season despite Rookie’s absence. TT also performed better than the previous season, but postponed the first victory ceremony to the next opportunity. 토토추천