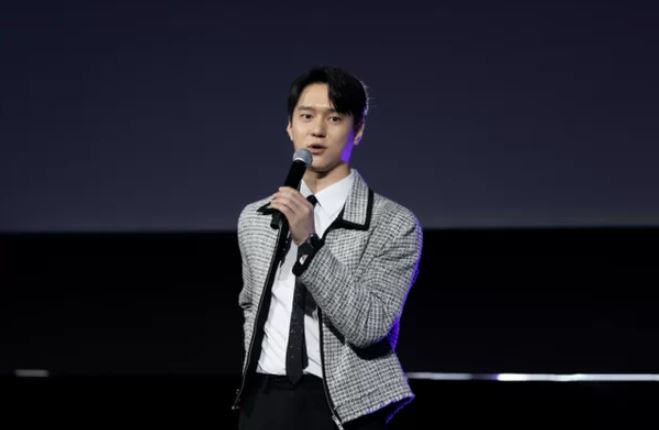 Ko Kyungpyo apologized to the coach for failing to diet.

On the morning of the 1st (local time), the “Asia-Pacific (APAC) Original Content Press Conference” was held at the main venue on the 2nd basement floor of Marina Bay Sands (MBS) in Singapore. Director Takashi Miike of “Connect,” lead actors Jung Hae-in, Ko Kyung-pyo and Kim Hye-joon attended the meeting.

Ko Kyungpyo played Jin-seop, a psychopath against Jung Hae-in. Ko Kyung-pyo of the comic movie “Yuksao” and tvN’s romantic drama “Monday, Wednesday, Friday, Tuesday and Saturday” will perform a cool performance that has never been seen before.

Coach Takashi Miike said, “Psychopaths usually imagine a cold, fat-free, slim feeling, but I chose a slightly fat and cute feeling,” adding, “There was a time to check how much weight Ko Kyung-pyo gained every morning.” And we started filming. Ko Kyung-pyo is a very charming person. Usually, I have fun laughing and talking, but when I started filming, I was completely immersed. He was very lovely and precious,” he said, drawing laughter.

Ko Kyung-pyo, who laughed loudly next to him, said, “The original director is a big fan, but what I felt while filming is that he has a lot of energy. As a director who was hard to see in the field, I felt a lot of passion and energy, so I was able to cheer up. The coach is full of consideration, he said. “I haven’t experienced much in Korea either. “I think my role as a coach was close to a perfect utopia,” he responded.

At the same time, he made a cute apology, saying, “I feel a little sorry for not losing weight, and I tried to concentrate harder because you thought I was cute.”

Meanwhile, the Disney+ original series “Connect” (Director Takashi Miike, Walt Disney Company Korea, Planning Studio Dragon, Production Studio Dragon, Reesfilm, and Studio Him), which will be released on December 7, is chased by a serial killer who made Korea noisy after being kidnapped by an organ trafficking organization. It is the first Korean production of Takashi Miike, a famous Japanese director who made “First Love,” “Missing Call,” “The Witch of Laplace,” and “The Battle of Evil” in exchange for genre films. It was created based on the Naver webtoon “Connect” of the same name, and was recently officially invited to the “On Screen” section of the 27th Busan International Film Festival, drawing keen attention from all over the world.