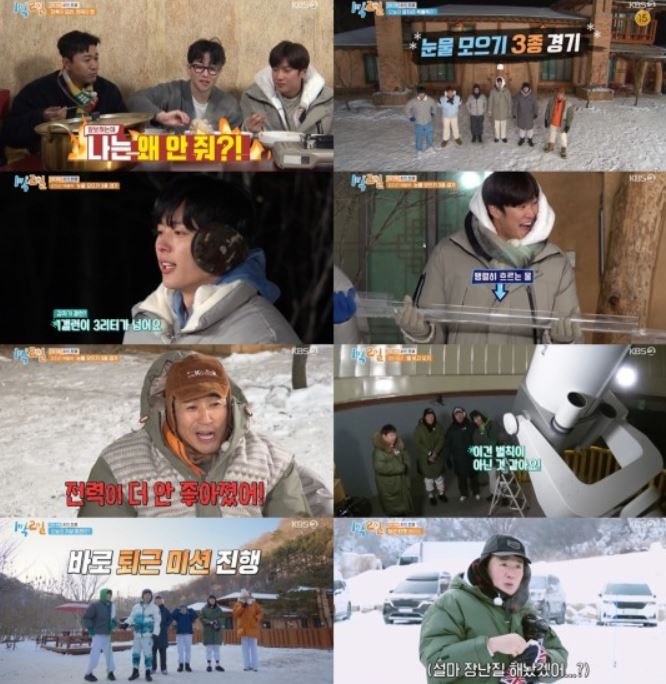 In particular, at the end of the broadcast, the scene where the other members laid down Nine Woo, who won the mission and became the eldest brother, and shouted fighting for newborns, soared to 11.2% per minute (based on national households), and the Sunday evening was filled with laughter.

The broadcast began with the members having a delicious dinner after setting up a rich cooking table with hard-earned ingredients. After dinner, the members gathered in one place were surprised by the unprecedented cold weather of minus 20 degrees Celsius. Then, in the sense of harmony after the confrontation of the “Hunmin War,” it began to play a random game of sleeping in a warm ondol room.

The dragonflies mission was a “triple race to collect tears,” which required a total of 6 liters of water to be collected through the third round. When the first round of the “Moving Water with Pipe” game began, the members even practiced in advance to strengthen their enthusiasm for the success of sleeping in the ondol room. In this game, which requires quickness and speed, Nine Woo and Yoo Sun-ho showed a mess of teamwork, slipping, and moved on to the next round with 600ML of water.

In the second round, he covered his eyes with “moving eyes with his hands” and put his eyes in a bucket and delivered them to the next person behind his head to collect water. The six men started the game fully prepared, even wearing goggles. The second runner, Nine-woo, who had to be looked at by the first runner Moon Se-yoon, failed to communicate and moved an empty bucket. Nine-woo diligently delivered it to the next runner Kim Jong-min, but the eyes were not contained in a bucket, and the eyes delivered by Moon Se-yoon were all covered by Nine-woo, creating an unconventional visual, causing everyone to laugh.

The final round of the “Move Eyes with Feet” game is a game in which six men only use their feet to move the washbasin containing snow for 100 seconds. When Yoo Seon-ho failed in a series of games on a high-level mission, Kim Jong-min said, “How did such a kid come in? “The power has gotten worse,” he said angrily, and eventually, the 6L water collection mission failed as it turned into a crazy snowball fight.

While sleeping in the cold room was confirmed, additional mission opportunities were given to sleep in the ondol room due to the generosity (?) of the production team. It was a success only when the majority shed tears within 30 seconds, and Yeon Jung-hoon, Yoo Sun-ho, Moon Se-yoon and Nine-woo succeeded side by side, and after twists and turns, the six men protected a warm indoor sleep.

The Yeonjeong “Hoon” team, which lost the last “Hoonmin War,” headed to the observatory late at night to carry out the punishment. Soon after, Yeonjeong’s “Hoon” team exclaimed at the beautiful scene while looking at various constellations and planets through a telescope, and wrapped up the mission warmly with an enormous star viewing observatory experience.

After a war, not a war, the members immediately began their mission to leave work. After moving each manager on a sled, you can go home right away by choosing a variety of hot items and melting the tickets inside the ice. However, only five first-come, first-served people could leave the office immediately, and the other one had to carry out sweaty penalties in the middle of winter.

Yeon Jung-hoon, who chose hot water as a hot item, was the first to melt the ticket to leave work and gain an advantage in getting off work. However, the ticket for leaving work obtained by Yeon Jung-hoon said “Seyoon leaving work” and the members’ names were written as random, giving a shock twist. Yeon Jung-hoon won tickets for Kim Jong-min and Yoo Sun-ho, following Moon Se-yoon’s departure from work before him, and helped other members leave the office, bursting into laughter from the viewers. Yeon Jung-hoon unintentionally proved the icon of bad luck.

The members then decorated the opening with colorful talks in the special “Age is Just a Number of Rice Cake Soup.” Prior to the full-fledged trip, all six men returned to the age of 0 and became friends, and the number of tteokguk eaten through the mission became their age and rank, adding to the excitement.

In the “Protect my alter ego” mission, each had to protect a life-size figure with their own face attached. As soon as the game began, Yoo Sun-ho’s life-size figure fell helplessly, and when DinDin and Moon Se-yoon attacked Yeon Jung-hoon’s life-size figure, Yeon Jung-hoon ran wild (?) alone and knocked down all the other members’ life-size figures except Nine Woo. As a result, Nine-woo, who was left until the end, rose from 0 to 1, becoming the biggest brother, and Nine-woo showed a great performance like “Nagondae” by presenting a crazy first birthday party that catches the members. It airs every Sunday at 6:30 p.m.