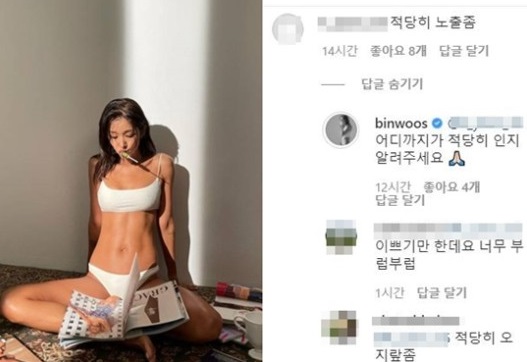 Kim Bin-woo revealed his best photos taken by the staff and said, “I like the naturalness. Anything is no filter,” he added. A solid body made with steady exercise and a confident charm catch the eye.

Internet users who saw it left responses such as “I’m really in love with passion,” “I’m on a diet and you’re so cool,” and “You’re always pretty.”

One Internet user, however, left a malicious comment, saying, “Please expose yourself appropriately.” In response, Kim Bin-woo said, “Please tell me how much is appropriate.”

Another Internet user who saw malicious comments about Kim Bin-woo said, “It’s just pretty. “I envy you so much,” he said, cheering for Kim Bin-woo.

Meanwhile, Kim Bin-woo made his debut in the entertainment industry through the SBS Super Model Contest in 2001. She married her younger husband in 2015 and has one son and one daughter.

Kim Bin-woo, who gained weight to 75kg after giving birth as a second child, said he recently lost up to 52kg through steady exercise and diet control.