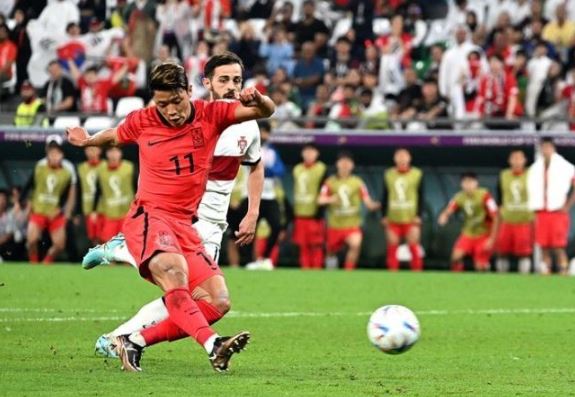 Hwang Hee-chan (26, Wolverhampton)’s come-from-behind winning goal against Portugal was included in the seven best scenes of the 2022 Qatar World Cup selected by FIFA.

FIFA selected and announced seven famous scenes while looking back on the Qatar World Cup, which ended with Argentina’s victory on the 26th. Hwang Hee-chan’s winning goal, which played a decisive role in the South Korean national soccer team’s advance to the round of 16, was also included.

In the third Group H match held at Education City Stadium in Qatar on the 3rd, South Korea gave up the first goal in the first five minutes and balanced 1-1 with Kim Young-kwon’s equalizer in the 27th minute of the first half.

One goal short of winning. He failed to take the lead even before extra time in the second half. At the end of the second half, he even allowed a corner kick and was on the defensive. The dream of the round of 16 seemed to be broken, but Korean players never gave up.

In Portugal’s corner kick situation, the ball was connected to Son Heung-min outside the box. Son Heung-min, who also showed off his stormy dribble in the EPL, grabbed the ball and ran across the half-line to the front of the Portuguese box. Portuguese defenders who participated in the corner kick tried their best to stop Son Heung-min, but they couldn’t handle his speed.

While Son Heung-min stopped for a while, Portuguese players blocked the front. Son Heung-min poked the ball between the Portuguese defender’s legs as he watched Hwang Hee-chan’s movement penetrating the box.

While focusing on Son Heung-min and missing Hwang Hee-chan, there was space at the gate. Hwang Hee-chan made a dramatic come-from-behind goal with an elaborate shot on the ball that Son Heung-min stabbed. It is Hwang Hee-chan’s goal that led Korean football to the round of 16 at the World Cup for the first time in 12 years.

Even the players on the bench came into the pitch and hugged Hwang Hee-chan and Son Heung-min and cheered. Even when they were dragged to 0-1, they hugged each other in front of the Korean audience who sang the cheering song without giving up and fell into cheers and shouts.

FIFA explained, “South Korea, which fell to the bottom of the group, needed hope to reach the round of 16,” adding, “Kim Young-kwon’s equalizer and Hwang Hee-chan’s winning goal at the end of the game.”

In addition to Hwang Hee-chan’s goal, Japan’s Ao Tanaka’s winning goal, which beat Spain 2-1, Youssef Enneciri’s winning goal in the quarterfinals, which made Morocco the first African team to advance to the semifinals, and Lionel Messi and Kylian Mbappe’s scoring match were also selected as the best scenes.