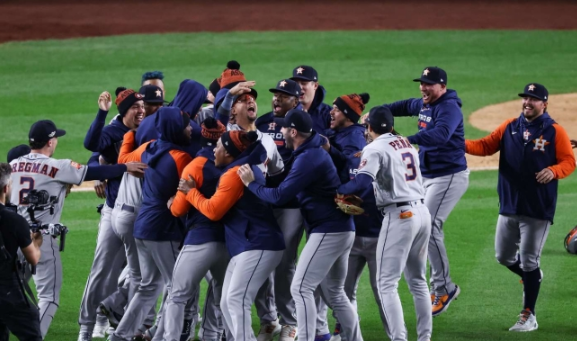 The Houston Astros won four consecutive games against the New York Yankees and confirmed their advance to the World Series for the second consecutive year.

Houston, which passed the division series against the Seattle Mariners with three consecutive wins, swept the championship series with four consecutive wins and seven consecutive postseason wins, making it to the World Series for the second consecutive year following last year.

In particular, Houston has become a solid strong team by advancing to the World Series in four of the six seasons from 2017 to this season, excluding 2018 and 2020. However, he only won the World Series once in 2017, but he will seek his second victory in the team’s history in five years.

Houston’s World Series opponent is the Philadelphia Phillies. Philadelphia beat the San Diego Padres 4-1 on the same day, making it the first World Series in 13 years since 2009. The two teams’ World Series will begin on the 29th with a best-of-seven series, and games 1, 2, 6, and 7 will be held at Minute Made Park, Houston’s home.

Houston fell behind the Yankees’ momentum in the early stages amid delays in the game due to bad weather. With one out and one out and runners on first and second base, Giancarlo Stanton and Gleaver Torres allowed two runs in a row.

In the bottom of the second inning, Anthony Rizzo was allowed an additional timely hit with two outs and runners on first and second base, and was dragged to 0-3.

But Houston’s potential was great. In the top of the third inning, Martin Maldonado and Jose Altuve picked up consecutive walks and tied the score with Jeremy Pe의a’s three-run home run. In the continued one-out first and third base chance, Yuli Guriel reversed the game with a timely hit.

The Yankees’ counterattack in the corner was also formidable. Houston allowed a timely hit by Rizzo in the bottom of the fourth inning with two outs and a runner on second base, and Harrison Bader gave up a solo home run in the bottom of the sixth inning, losing the lead again to 4-5.

But Houston’s concentration was higher. Altuve hit a hit after one out in the top of the seventh inning, and the Yankees’ fielder choice came out of Pe의a’s at-bat, making it the first and second base. After tying the score with Jordan Alvarez’s timely hit in the ensuing chance, Alex Bregman turned the game around 6-5 again with a timely hit by Yankees closer Clay Holmes.

Houston no longer allowed the Yankees to pursue. Brian Abrayu in the seventh inning, Rafael Montero in the eighth inning, and Ryan Pressley in the ninth inning ended the game by blocking nine batters with “perfect.”

The Yankees, which had been seeking to advance to the World Series for the first time in 13 years since 2009, failed to show the prowess of the regular season against Houston. Following 2017 and 2019, he failed to overcome Houston’s wall in the championship series again, and this time he stepped down with a lethargic defeat, especially with four consecutive losses.

Aaron Judge, who led the Yankees’ lineup with 62 home runs in the regular season, suffered a severe batting slump of one hit (0.062) in 16 at-bats, providing an excuse for defeat. In Game 4, he had only one walk and no hits in four at-bats, and had his last out count in the bottom of the ninth inning. 메이저사이트

The game could be Jersey’s last for the Yankees, who will become a free agent after the end of the season.