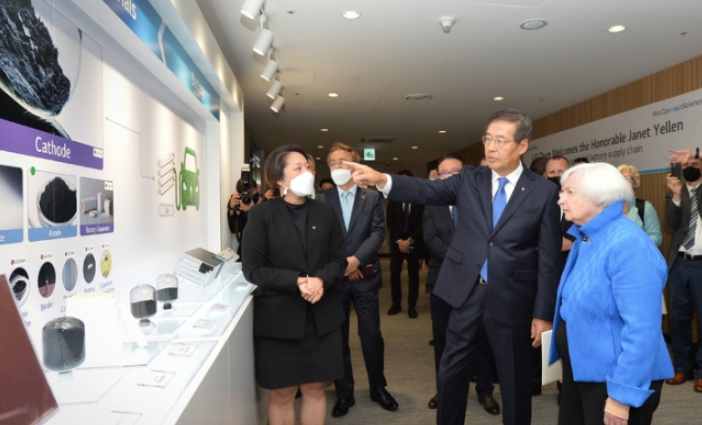 Following U.S. President Joe Biden’s visit to Samsung Electronics, U.S. Treasury Secretary Janet Yellen visited LG Chem during her visit to Korea, and the “Korea-U.S. Battery Alliance” is moving to strengthen further. Attention is focusing on whether Samsung Electronics and LG Chem, which have recently turned to foreign buying, will rebound.

According to the financial investment industry on the 20th, the U.S. chief’s successive visits to major domestic battery companies are raising investor sentiment in “K-battery” stocks. Shares of Samsung Electronics and LG Chem have been strong since Janet Yellen’s visit.

Minister Janet Yellen was the only Korean company to visit LG Chem in her first trip to Korea. Earlier, President Biden visited Samsung Electronics’ Pyeongtaek semiconductor plant in May. This is interpreted as a strategy to solidify the U.S. government’s ‘South Korea-U.S. battery supply chain alliance’.

Minister Yellen visited LG Chem’s Magok R&D campus in LG Science Park at 9:30 a.m. and held a private meeting with executives including Shin Hak-cheol, vice chairman of LG Chem. It is said that he discussed with Vice Chairman Shin how to cooperate on building a material supply chain.

Referring to the concept of “friendshoring,” Minister Yellen explained, “By strengthening relationships and diversifying supply chains, it is a way to increase trade with partners and manage economic risks in each country.”

“The U.S. can never solve supply chain vulnerabilities alone. We should try to achieve stronger economic growth by introducing friend shoring between partner allies. We will continue our efforts to maintain supply chain order through collaboration.

The investment industry is paying attention to whether the move will serve as an opportunity for the sluggish K-battery stock to rebound.

“LG Chemical will invest a total of 6 trillion won in battery materials by 2025 to foster various product portfolios such as anode products and separation membrane carbon nanotubes. We will continue to develop our vision to develop a vision to introduce new innovations to the U.S. electric vehicle industry.

LG Chem fell to a high of 773,000 won on January 12 this year and rebounded after 437,000 won on March 16, but has been struggling. LG Chem predicted that related investments to localize the U.S. battery supply chain will exceed $11 billion (about 14.4 trillion won) by 2025, and attention is being paid to whether such expectations will rebound.

Although Samsung Electronics continued to perform all-time high this year due to concerns over a global economic recession caused by the U.S. austerity policy, its stock price fell on the contrary, breaking new lows. This year, it continued to fall from 75,800 won during the day on February 10th, hitting a low of 55,700 won on the 4th.

Even in the investment industry, the second quarter’s performance is expected to be low amid unfavorable internal and external factors, but it is on par with the performance of the semiconductor “super cycle (long-term boom)” period between 2017 and 2018. It achieved provisional sales of 77 trillion won in the second quarter, and it is the second time since the first quarter of this year that it has achieved sales of 77 trillion won.

Since the 7th, except for the 13th and 19th, foreigners have turned to net purchases. Considering that Samsung Electronics’ stock price has been driven by foreign selling, attention is being paid to whether the K-battery alliance will serve as an opportunity to increase foreign buying.