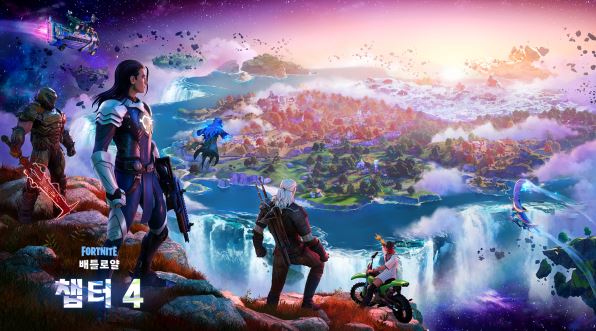 Epic Games Korea announced on the 5th that it will start Chapter 4 – Season 1 of the survival game Fortnite.

First, Chapter 4 is equipped with Unreal Engine 5.1, the latest version of Unreal Engine 5, allowing you to experience high-quality games. Millions of polygons are rendered while supporting 60fps through functions such as Nanite, Lumen, Virtual Shadow Map, and Temporal Super Resolution, and realistic light and shadow are implemented to enjoy the next-generation visual quality. It was applied to PS5, Xbox series X|S, and ‘Fortnite Battle Royale’ for cloud gaming, including PCs.

Fortnite Battle Royale Chapter 4, which introduces the new island, has added five types of regions, including Shattering Slabs, which can obtain kinetic ore with magical effects, and can also increase power by enhancing reality. You can move or play in new ways, such as riding a mountain motorcycle, rolling in snowballs, or floating in the air with a shock wave hammer.

The new areas include the Agiris-dominated St Citadel, the peaceful-looking village of Anvil Square in the forest, and the abandoned farm Frenzy Fields maps. The kinetic ore obtained from the Schathed Slabs mining facility can create a magical effect and strategically attack the enemy. In addition, at Brutal Bastion, the headquarters of snow-covered warriors, hitting the snow with a pickaxe creates a snowball and attacks the enemy by jumping into the snowball and rolling it.

Weapons and items were also added. You can use weapons such as X-Caliber rifles, thunder shotguns, and Maven automatic shotguns, including shock wave hammers that can damage the enemy and blow the opponent away at the same time. Healing items such as slapberry and slap juice increase effective physical strength and increase the duration of energy regeneration. In addition, contact with the floating sky jellyfish on the map can increase effective physical strength. You can perform tricks on a mountain motorcycle called Trail Thrasher, or use weapons on your way on a motorcycle.

Chapter 4 Season 1 Battle Pass was also released. If you purchase a battle pass this season, Selene will be unlocked immediately. The collaboration costumes Doom series “Doom Slayer” and The Witcher series “Gerolt of Libya” as well as the clothes of Ageless, Masai, Dusty, and Nezumi, which are the IPs of Fortnite, can be unlocked.