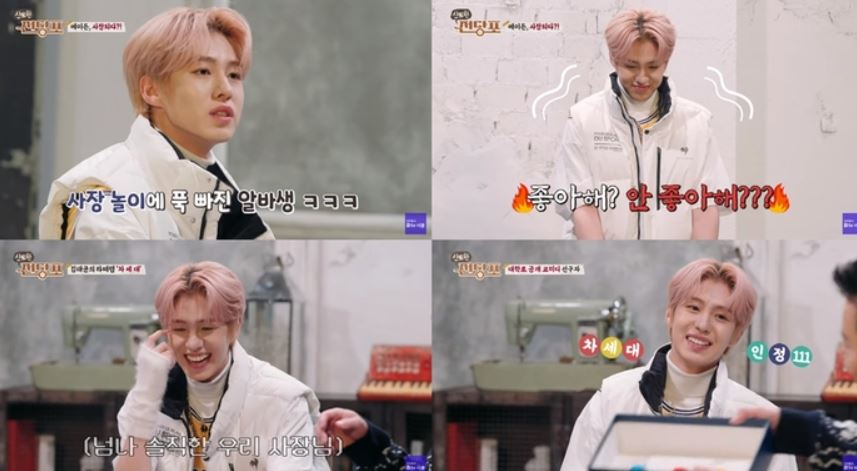 Group EPEX Aiden has served as the mascot of the “Mysterious Pawnshop.”

Aiden appeared as a part-timer in the last episode of the SKb entertainment program “Mysterious Pawnshop,” which aired on the 7th, giving various fun.

“Mysterious Pawnshop,” which first aired in November last year, is a full-fledged generation empathy latte talk variety that upcycle latte items that are not used now but cannot be thrown away.

Aiden led the guest’s honest talk with President Lee Jin-ho and Chief Jang Ye-won in charge of the part-time job.

Aiden, who appeared in the studio on the same day, pretended to be Lee Jin-ho after confirming that the president Lee Jin-ho and the director Jang Ye-won had not come yet. Aiden skillfully imitated Lee Jin-ho and enjoyed the time alone.

At this time, Lee Jin-ho and Jang Ye-won appeared, and they watched Aiden from behind and held back their laughter. Sensing the cool energy, Aiden`s immediately got up from his seat, bowed his head, and looked around.

Lee Jinho said, “Are you imitating me? Go raise your hand,” he shouted. Then Aiden`s said, “I was just playing a little prank,” and stood in front of the wall in despair, making the situational play more realistic, drawing laughter.

Kim Tae-kyun then appeared as a guest. Aiden`s made a mistake in saying “I was born in 1922” while reading Kim Tae-kyun’s request, which further eased the mood. Since then, Aiden`s listened to Kim Tae-kyun and sympathized with him, and was deeply moved by his efforts.

Aiden, who further enhanced viewers’ immersion with sympathetic reactions and comments, even delivered laughter with playful comments in the right place. In addition to making the guest more comfortable, Aiden’s sincere appearance and charm created warmth.