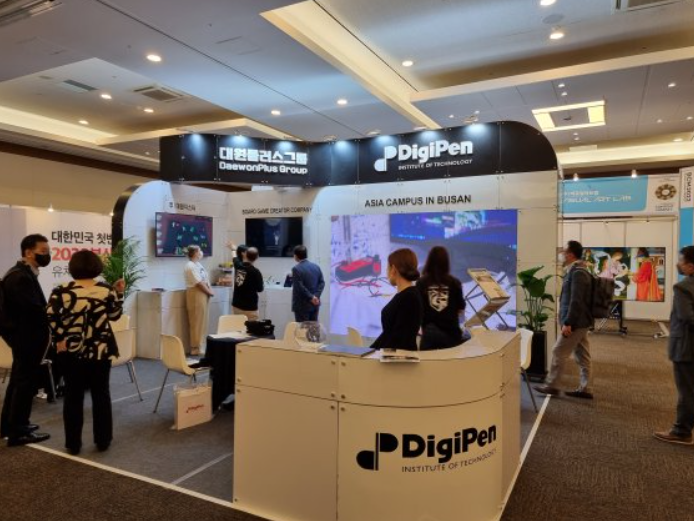 In November, Digipen University of Technology signed an agreement with Busan City (Mayor Park Hyung-joon) and Daewon Plus Group (Chairman Choi Sam-seop) to establish an Asian campus and attract investment to create a game-specific city.

Digipen University of Technology is participating in this year’s Busan Content Market, which is held under the main theme of “Looking for trends and developments in new media and content formats and media markets,” to introduce Digipen University and promote its vision for a game city in Busan.

Digipen University of Technology, located in Seattle, USA, was established in 1998 and has branches in Singapore and Spain. It opened a game design major for the first time in the world and was named the best game design university by Forbes magazine. It has more than 550 alumni networks, a global game company, and is gaining global fame as it is called “Harvard in the game world.”

Through practical and project-oriented curricula, graduates are employed by leading IT companies in the world such as Microsoft, Amazon, and Apple.

Based on these excellent manpower, there were only nine game companies in Washington state at the time of the establishment of Digipen University. As of 2019, Seattle Redmond, where Digipen is located, has grown into a global game industry hub with more than 23,000 people working for 400 game companies.

This year’s event is drawing attention as Daewon Plus Group, which is co-promoting the establishment of an Asian campus with Digipen University of Technology, participates together.

Daewon Plus Group is famous for its global developers such as Haeundae Marine City Doosan Web the Zenith, Asia’s tallest residential facility, Korea’s first offshore cable car, and the world’s largest artificial surfing park. Daewon Plus Group, which has recently expanded its investment in game-specific cities, blockchain, and board game development, is preparing to take a new leap forward through synergy with various fields such as film, video, marine leisure, and tourism.

An official from Daewon Plus Group said, “We are currently working with Busan and Digipen to establish an Asian campus and create a game-specialized city,” adding, “Before that, we are preparing to open the best Digipen Game Academy in Busan.”

“We are also planning a global game convergence space such as a specialized game global village,” the official said. “Participating in the Busan content market this year is meaningful in sharing this vision with content ecosystem companies and Busan citizens and actively cooperating with Busan to grow into a global convergence content city.” 토토사이트

Sponsored by the Ministry of Culture, Sports and Tourism and Busan City, the Busan Content Market was created to link the success of the Busan International Film Festival (BIFF) to the content business, a high value-added industry. This year, it is being held under the theme of Your Story is Our Story for three days from the 8th to the 10th.