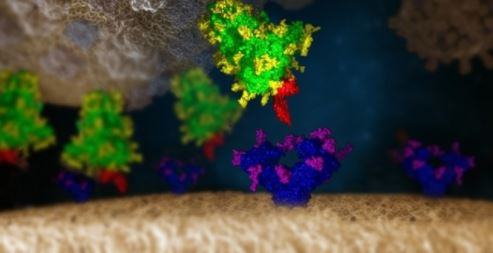 A foreign research team has found a way to neutralize gastrointestinal technology that deceives the immune system used to infiltrate human cells by viruses (SARS-CoV-2), which cause new COVIDvirus infections (COVID 19).

Using this, the research team expected to develop treatments that can be used widely regardless of the strain virus type, such as delta mutation.

Dr. Joseph Penninger’s team at the Institute for Molecular Biotechnology (IMBA) of the Austrian Academy of Sciences announced on the 11th that it has found two glycoproteins that combine with the spike protein of the COVIDvirus to prevent it from infiltrating human cells.

Many “spike glycoproteins” are attached to the surface of the COVIDvirus. This spike protein is used when viruses bind to receptors in host cells, which are known to penetrate the human body by binding to many “Angiotensin Conversion Enzyme 2” (ACE2) in bronchial tubes and lungs.

The contagious nature of the virus depends on how well spike proteins and ACE2 bind together.

The COVIDvirus is known to deceive the human immune system by covering the surface of the spike with glycan, a glycosylation compound, in order to protect the spike protein, which is vital to its contagious power.

The research team found a way to neutralize camouflage of the COVIDvirus by binding directly to spike proteins in the study.electin) 140 combination properties were explored.

As a result, it has been found that two lectins, “Clec4g” and “CD209c,” bind well to the core areas where the “glycosylation” reaction occurs in spike proteins of the COVIDvirus.

The research team believes that the glycosylation reaction site of spike protein is very well preserved in the event of the current delta mutation virus, so the newly discovered glycosylated protein can be used for all mutations.

In particular, these two rectins have been shown to bind well to the N-glycan site (N343) of spike proteins. It is known that if lost, the spike protein will become unstable and lose its contagious power, so it will not be lost in any mutations.

The research team expects that it will be possible to develop a treatment that can be used widely regardless of the type of mutation.

“Now we have a way to neutralize the protective membrane of the COVIDvirus to prevent it from infiltrating human cells,” said Stephen Merreiter, a co-researcher.

“If the spike protein of the COVIDvirus is preoccupied by the drug (rectin), the virus will block the gateway to human cells,” Dr. Peninger said. “We have confirmed that the lectin of mammals in the natural world works exactly that way.”안전놀이터