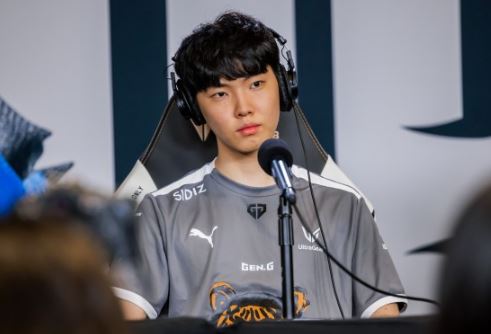 On the 31st (Korea time), the semifinals of the 2022 League of Legends World Championship (hereinafter referred to as the LOL World Cup) and Gen.G vs. DRX were held at State Farm Arena in Atlanta, Georgia.

Gen.G started off pleasantly with a victory in the first set, but was defeated in succession and failed to advance to the finals due to frequent mistakes and sluggish performances in the second, third, and fourth sets.

In a joint press interview after the game, Jung Ji-hoon said, “Jeka was originally a good player. “I think I showed my growth one step further after coming to Worlds,” he said, expressing his feelings about the face-to-face match with ‘Jeka’ Kim Gun-woo.

When asked why Gen.G was sluggish in the LOL World Cup, he replied, “We couldn’t play according to the combination we picked or the direction of our play,” adding, “I think it’s because we didn’t play well.”

As for writing a sudden blinking-gall with Rise in the fourth set, he said, “I was counter-jungling Blue, and I saw Barus over the wall, and there was Kindred. I thought that I could die if I used a flashing palace, so I wrote flashing, but Barus was in the Mead. He explained, “My prediction was wrong, so I only blinked.”

Gen.G, who was highly anticipated by winning the championship with overwhelming performance in the ‘2022 LCK Summer’ season. In this regard, Jung Ji-hoon, who said, “There was no pressure,” evaluated his performance in the semifinals, saying, “I felt sorry for everything from trivial things to the overall framework of the game.”

“I’m sorry I couldn’t make it to the final. “I know what I have to do within this game while playing this Worlds, but I think it’s a shame that I couldn’t do it,” he said repeatedly.