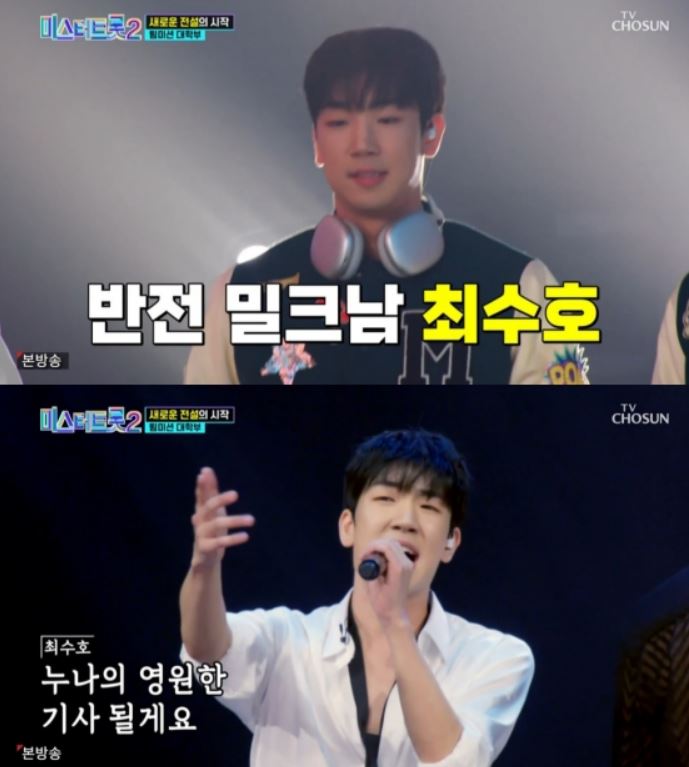 Choi Soo-ho caught the eyes of viewers on the team mission stage of the “Mr. Trot 2” university finals.

Choi Soo-ho appeared on TV Chosun’s “Mr. Trot 2,” which aired at 10 p.m. on the 5th, drawing out the university club Allheart with his unexpected charm that threw off his boyish charm.

“Mr. Trot 2” is a trot audition program looking for the next Korean trot hero, and is the fourth project in the “Miss Trot” and “Mr. Trot” series that first aired in 2019.

According to officials, Choi Soo-ho, born in 2002 and 21 years old this year and majoring in pansori, made headlines among numerous cast members for his warm appearance, Guseongjin’s singing style, and solid singing ability similar to actor Yoo Yeon-seok in the first broadcast.

Following the heated competition’s master preliminary trial, the university department, including Choi Soo-ho, who advanced to the finals with all hearts, sang Jang Min-ho’s “I love you sister” on the team mission stage.

Choi Soo-ho, who was in charge of the killing part of the stage, threw off his jumper, the symbol of the university club, and appealed his sexy yet intense masculinity.

Original singer Jang Min-ho praised, “I should get a tip from the university’s stage and sing ‘I love you noona’.”