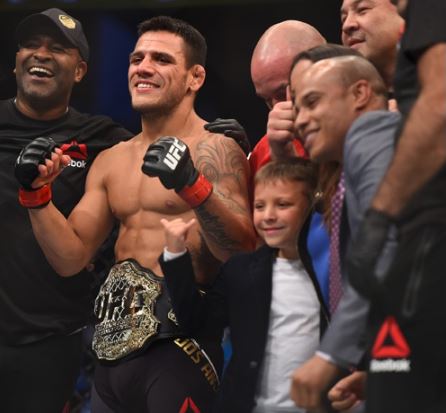 Former UFC lightweight champion Rafael dos Anjos (38, Brazil) will play his third game this year. The UFC Fight Night “Thomson vs Holland” competition, which will be held at the Amway Center in Orlando, Florida on the 4th, is the stage for Brian Barberena (33, USA), and the dark horse in the weight class, which has recently won three consecutive games. The two will face off in a welterweight match.

Dos Anyos is one of the veterans representing the organization, as can be seen from his playing at UFC from 2008 until now. Although his height (172.72 cm) is not large, he continues to be competitive with his practical play based on the harmony of hitting and submission. Of his 31 wins, 16 (52%) are judged, but he often produces impressive scenes in knockouts and sub-missions, so he has a strong image of a hot fighter.

He is a case who made his name known at a rather late age. Although he has consistently performed well since before, it is true that he regretted an impactful victory against the so-called strong players. It was evaluated as 2% insufficient to reach the top, but it has been awakened since 2014 and has risen to a new level. Benson Henderson, Donald Seroni, Nate Diaz and Anthony Pettis will be defeated one after another to become a new ruler.

Analysts say that the upgrade of batting ability had the biggest impact on this. Dos Anyos, who used to be a joujit group, succeeded in evolving into an all-weather total fighter while properly mounting the hit. Beyond just being good at it, it was fast, diverse and heavy enough to defeat professional hitters with firepower in the standing battle.

Against Henderson, who has good defense skills and avoidance skills, he responded more than that to a quick attack, and above all, he was able to take the lead in the standing match with an overwhelming advantage in power. He kicked freely with his front and back feet as well as his body shots and straight feet. At this time, it is true that there was a lot of doubt about Dos Anyo’s batting ability.

However, the evaluation begins to change significantly after winning a complete victory in the standing area against Petis, who once had the strongest striker force. The middle kick gained the upper hand with a middle kick against Petis, his main specialty. In the match at the time, Anjos pressed Pettis without hesitation and kicked a middle kick faster and heavier. Pettis had no choice but to panic.

When Petis counterattacked, he avoided the counter as if he had waited and aimed for the counter. Body shots and take-downs were used as a combination, and when Petis without Earl prepared for the pattern, he swung a heavy punch to the face instead of a tackle. For Petis, there was nothing to do throughout the fifth round. After pressing with punches and kicks against Ceroni, who was the second most upset by firepower, the game ended in 1 minute and 6 seconds of the first round with a series of storms. Some even said, “A new lightweight ruler has been born to succeed Frankie Edgar.”

Unfortunately, Dos Anjos’ stormy run was hit by Eddie Alvarez and the brakes were jammed. Dos Anyos was expected to win in terms of power, but he was beaten by an unexpected blow and collapsed, losing his championship title. If it wasn’t for the defeat at the time, the big matchup opponent with Conor McGregor would have been Dos Anyos, not Alvarez.

For Dos Anyos, it can be said that it was a match of pain that shocked him with more than one loss. Alvarez was unilaterally beaten by McGregor, who came up from the lower division after failing to overcome the limitations of his size. Analysts say that Sang-sung played a role in the match against McGregor, a puncher type that has the same punch-oriented fighting style. On the other hand, Dos Anyos is likely to have fought much better as he has even grappling and kicks.

Dos Anyos’ bad luck didn’t stop there. In the match against Ferguson, he also lost in a row. It was clear that Ferguson was strong enough to aim for the championship title, but the early flow was taken by Dos Anyos and the atmosphere went over after the eye poke.

He beat Tarek Safidin, who was considered a tricky opponent by anyone, and surprised the surroundings by catching tall Graffler Neil Magny. Some even said, “In fact, there is a difference between the two weight classes” with the 190cm Magny, but he showed off his Jiu-Jitsu technique on the ground and won a complete victory. Dos Anyos’s appearance of blocking the road while pressing Magny from the top was enough to reaffirm his presence as a group of special jiujitro, which had been hidden from the batting for a while.

However, there was no business in front of time. Dos Anyos has come down from his heyday since 2018, and has begun to move away from the top. He suffered a series of hardships in the match against the top rankers and seemed to be taking steps to retire. However, the extent of aging does not seem to be significant compared to other veterans. As can be seen from the fact that they have lost more than two consecutive games, they still have a fierce taste for their mid-tier opponents.

He has recorded one win and one loss in two games this year, and he has maintained much of his physical strength to the extent that he led the game to the fifth round. Of course, Barbara, who will play against him, is not an easy opponent. It is on the rise with its good size of 182.88cm and strength and mill. Although he is said to have passed away, he also caught Robbie Lawler, who is famous for his stone fists and grit, with a knockout.

Dos Anyos’ batting is still sophisticated. Barberena, on the other hand, is rather rough and close to a wild fight. Nevertheless, it is analyzed that the beast’s instinct to endure the opponent’s onslaught in the early stages and slowly turn the atmosphere upside down with mud fights and eat them up had a big impact.

Attention is focusing on whether Dos Anyos, who showed more than that every time there is a harsh criticism that “That’s your limit,” will be able to lay the foundation for a leap forward by revealing his veteran fighting spirit again.