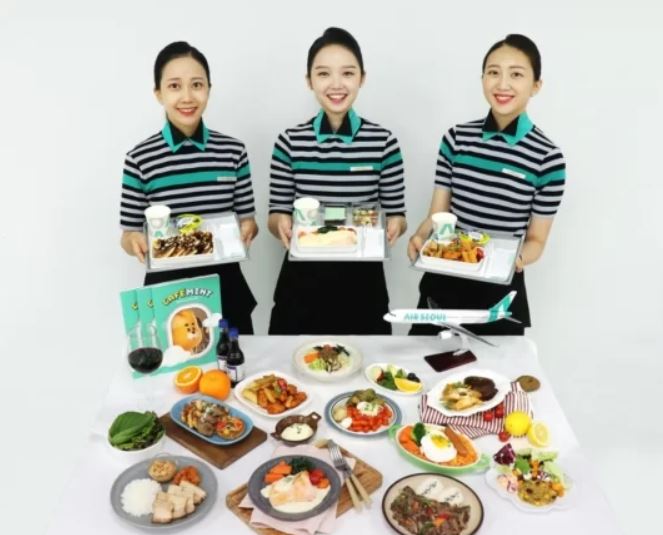 Air Seoul will sell “Hot Meal” in-flight meals on all international routes, including short-distance routes such as Japan, from the 2nd.

Air Seoul will also provide priority check-in services at the  Seoul Premium Counter at Incheon International Airport on the day of departure, limited to passengers who purchased pre-in-flight meals online. You may also be assigned a preferred seat (excluding the mint zone) among the remaining seats. The boarding period for which the benefits are applied is until February 28, and one-way flights from Incheon are eligible.

An  Seoul official said, “We will sell hot wheat in-flight meals on short-distance routes from this year due to the large number of requests from passengers,” adding, “There are more than 11 different menus for men and women of all ages.”

It boasted a larger seat than other low-cost airlines. The average seat is the equivalent of a third-party cooperative emergency exit seat. However, the A321, which was introduced recently (November 2017), had 220 seats, and the seat pitch was reduced from 32 inches to 29 inches, which was the level of a legacy airline. The additional aircraft to be introduced is likely to be 29 inches, so a large seat may no longer be an advantage. Currently, even if he is a little over 180cm tall, his knees touch the front seat, and so on. Currently, 220 seats are only available on domestic flights.
Naturally, it is operating jointly with Asiana Airlines, and in-flight meals will be provided along with accumulating Asiana Club mileage when issuing tickets from Asiana. Of course, the price of the flight ticket is much higher than that of making a reservation at Air Seoul.In addition, only some routes are provided with in-flight meals, so in some cases, they are not accepted despite reservations for in-flight meals.
Initially, Asiana Airlines was able to issue a joint flight to Air Seoul alone, but in early 2019, it was possible to issue a joint flight only by departing from the other country or via Incheon. For example, before the change, Air Seoul’s Shizuoka route from Incheon could be issued through Asiana, but now only the Incheon route from the other country or the Incheon route could be issued. These problems were resolved in mid-April, and now it is possible to check and issue Air Seoul routes from Asiana again.
In addition, in the case of domestic flights, other airlines pour water in paper cups for free, but Air Seoul does not have such a thing. It is said that only two types of coffee are sold, PET bottle water and warm coffee. In other words, you should also buy water.
Errors often occur during the payment process. If you try several times and press the details after making a reservation, an error occurred while inquiring probably. The phrase comes out, and you can’t check your seat or refund anything. Once this phrase appears, it is recommended to call the customer service center immediately because no matter where you look up mobile, computer, or application.